Washington, DC, Jan.16.– The Center for Immigration Studies has published multiple analyses of the Biden administration’s latest border “enforcement” plan. The plan, which contains little enforcement, includes minor changes to tactics, but no change to the Biden administration’s long-term open-border strategy. It does include a massive (and illegal) expansion of “parole” that will admit and give work permits to 30,000 aliens from Venezuela, Haiti, Cuba, and Nicaragua every year. 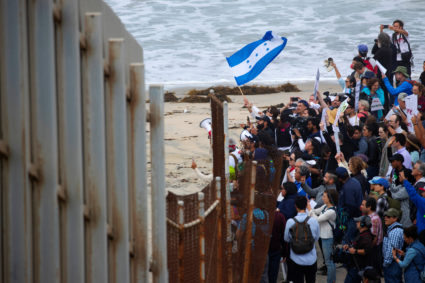 “The administration claims that this plan will allow aliens ‘to enter the United States lawfully through’ those ports of entry, but in reality “entering” without a visa through a port of entry is as ‘illegal’ as crossing the border without a visa between the ports of entry, regardless of whether you have an appointment to do so,” writes Andrew Arthur, the Center’s Fellow in Law and Policy.

CIS Executive Director Mark Krikorian explains the president’s immigration goal: “This is merely political damage control. The Biden administration continues to push ‘safe, orderly, and humane processing’ of migrants with no right to enter the U.S., instead of deterring them from trying to come in the first place.”

President Biden has put forth an immigration scheme that disregards the rule of law and Congress, which specifically enacted legislation to prevent what he’s trying to do. George Fishman, a Senior Legal Fellow at the Center, said, “President Biden is taking his perversion of the immigration ‘parole’ power to a new low. He is literally pushing the Constitution's separation of powers into the gutter by creating a shadow immigration system totally divorced from the will of Congress and the American people. He plans to proudly parole into the U.S. up to 360,000 otherwise illegal aliens a year with no basis in law, and we know that they will never leave.”

Biden’s parole scheme does convey huge benefits to him. If aliens enter the United States on parole, they won’t be apprehended and won’t be counted in the Biden administration’s now massive border numbers.

Will the Biden plan have an impact on the massive number of aliens entering the country? Elizabeth Jacobs, the Center’s Director of Regulatory Affairs and Policy, writes, “Unless the Biden administration commits to closing loopholes in the asylum system and either reviving the Migrant Protection Protocols (MPP, commonly known as the “Remain in Mexico” program) or resuming mandatory detention (as is required by law) for aliens who illegally cross the border, its strategy is unlikely to have any of the deterrence effects it’s promising. The near-guarantee of release into the United States has been a primary pull factor for illegal immigration since January 2021 and will continue to be unless the administration makes these necessary changes to its border policies.”

We have 903 guests and no members online