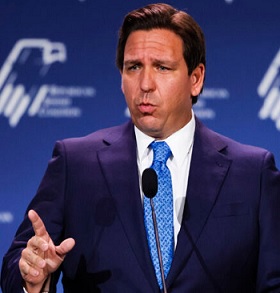 FL Governor Ron DeSantis Tallahassee, Jan.6.– A central Florida county on Friday issued a notice of its plans to seek legislation that would allow for dissolving Walt Disney World’s self-governing area to appoint a state-run board to manage the district while a spokesperson for Florida Gov. Ron DeSantis said Friday that “Disney will no longer control its own government” under the proposal.

“Notice is hereby given of intent to seek legislation before the Florida Legislature, during a regular, extended, or special session, of an act relating to the Reedy Creek Improvement District,” said a notice from Osceola County on Friday. Reedy Creek, established in the 1960s, is the name for Disney’s self-governing district and is located in Osceola and Orange counties and allowed Disney to control the land currently occupied by its massive theme park.

Friday’s notice also stated that Florida lawmakers will take up legislation “increasing state oversight, accountability, and transparency” of Reedy Creek district. Republicans currently hold supermajorities in both chambers of the Florida legislature, although a bill hasn’t been filed in the Legislature as of Friday.

The move to dissolve Reedy Creek is backed by Republican Gov. Ron DeSantis, who has been a frequent critic of Disney’s jumping into the political arena to back leftist causes. Disney is one of the largest employers in the state and Walt Disney World is one of the world’s most popular theme park attractions.
(...)

You cannot legislate the poor into freedom by legislating the wealthy out of freedom. What one person receives without working for, another person must work for without receiving.

We have 886 guests and no members online