Former Soviet states have become unlikely defenders of the rule of law.

Oct. 26.– In too many places around the world, freedom is denied. In theocracies such as 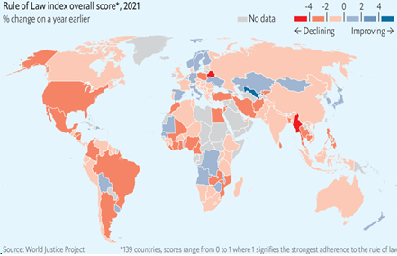 Afghanistan and Iran, women lack the right to dress as they please. In countries from Myanmar to Sudan, juntas rule. And Vladimir Putin, Russia’s president, has not only launched a lawless war against his neighbour, Ukraine, but clamped down further on his own people’s rights. Yet there are bright spots too—and some of these can be found on Mr. Putin’s doorstep (see chart).

This can be seen in a report published on October 26th by the World Justice Project, a charity based in Washington, DC. It draws on tens of thousands of responses from legal practitioners, local academics, and household surveys to produce the Rule of Law Index, a ranking of 140 countries and jurisdictions according to a series of indicators: constraints on government powers, the absence of corruption, fundamental rights, and criminal and civil justice.

Globally, the latest update makes for grim reading. The majority of countries on the index declined for a fifth consecutive year in 2022. Freedom of expression is down in over 80% of countries since 2015; adherence to the rule of law fell in 61% of them in the past year.

Sudan and Myanmar are leading the decline. Russia’s ranking has tumbled in the past five years, landing it in 107th place. But other former Soviet and communist states, in eastern Europe and Central Asia, have bucked the trend. Five of them have been among the top ten improvers on the rule of law since 2015.
(...)

We have 1212 guests and no members online