Ben S. Bernanke (L), Douglas W. Diamond (C) and Philip H. Dybvig (R) Stockholm, Oct. 9 (DP.net).– The American economists Ben S. Bernanke, Douglas W. Diamond and Philip H. Dybvig are the three winners this Sunday of the 2022 Nobel Prize in Economics for having "significantly improved our understanding of the role of banks in the economy, particularly during financial crises", reported the Royal Academy of Sciences.

"Modern banking research clarifies why we have banks, how to make them less vulnerable in crises and how bank collapses exacerbate financial crises. The foundations of this research were laid by Ben Bernanke, Douglas Diamond and Philip Dybvig in the early 1980s", the jury reported.

"Their analyses have been of great practical importance in regulating financial markets and dealing with financial crises", explained the Swedish institution. "The laureates’ insights have improved our ability to avoid both serious crises and expensive bailouts,” says Tore Ellingsen, Chair of the Committee for the Prize in Economic Sciences.

Ben S. Bernanke was director of the United States Federal Reserve (FED) between 2006 and 2014 and is a senior fellow at the Brookings Institution in Washington DC. Douglas W. Diamond is Professor of Finance at the University of Chicago. Philip H. Dybvig is Professor of Banking and Finance at Olin Business School at Washington University in St. Louis. 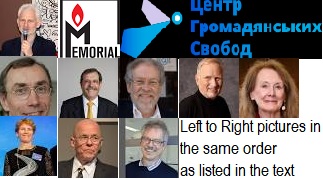 Stockholm/Oslo, Oct.7 (DP.net).– The Noble prizes in medicine, physics, chemistry, literature and peace were established by the will of Alfred Nobel, a wealthy Swedish industrialist and the inventor of dynamite. The first awards were handed out in 1901, five years after Nobel’s death. Each prize is worth 10 million kronor (nearly $900,000) and will be handed out with a diploma and gold medal on Dec. 10 — the date of Nobel’s death in 1896. The economics award — officially known as the Bank of Sweden Prize in Economic Sciences in Memory of Alfred Nobel — wasn’t created by Nobel, but by Sweden’s central bank in 1968.

Nobel Peace Prize.– The Norwegian Nobel Committee has decided to award the Nobel Prize MedalNobel Peace Prize for 2022 to one individual and two organisations. It is awarded to human rights advocate Ales Bialiatski from Belarus, the Russian human rights organisation Memorial and the Ukrainian human rights organisation Center for Civil Liberties. The Committee underlines that: «The Peace Prize laureates represent civil society in their home countries. They have for many years promoted the right to criticise power and protect the fundamental rights of citizens. They have made an outstanding effort to document war crimes, human right abuses and the abuse of power. Together they demonstrate the significance of civil society for peace and democracy.»

Nobel Prize on Physiology or Medicine.– Awarded to Svante Pääbo "for his discoveries concerning the genomes of extinct hominins and human evolution". The Committee explains that: «Through his pioneering research, Svante Pääbo accomplished something seemingly impossible: sequencing the genome of the Neanderthal, an extinct relative of present-day humans. He also made the sensational discovery of a previously unknown hominin, Denisova. Importantly, Pääbo also found that gene transfer had occurred from these now extinct hominins to Homo sapiens following the migration out of Africa around 70,000 years ago.»

Nobel Prize on Physics.– The Royal Swedish Academy of Sciences decided to award the Nobel Prize in Physics 2022 to Alain Aspect, John F. Clauser and Anton Zeilinger, “for experiments with entangled photons, establishing the violation of Bell inequalities and pioneering quantum information science”. The Academy added that: «Alain Aspect, John Clauser and Anton Zeilinger have each conducted groundbreaking experiments using entangled quantum states, where two particles behave like a single unit even when they are separated. Their results have cleared the way for new technology based upon quantum information.»

Nobel Prize on Literature.– Awarded to the French author Annie Ernaux “for the courage and clinical acuity with which she uncovers the roots, estrangements and collective restraints of personal memory”. The Swedish Academy explains that «in her writing, Ernaux consistently and from different angles, examines a life marked by strong disparities regarding gender, language and class. Her path to authorship was long and arduous.»

Nobel Prize on Chemistry.– The Royal Swedish Academy of Sciences awarded this prize to Carolyn R. Bertozzi, Morten Meldal and K. Barry Sharpless “for the development of click chemistry and bioorthogonal chemistry”. The Academy explains that: «Sharpless and Meldal have laid the foundation for a functional form of chemistry – click chemistry – in which molecular building blocks snap together quickly and efficiently. Bertozzi has taken click chemistry to a new dimension and started utilising it in living organisms.»

Nobel Prize on Economics.– This prize is based on a donation received by the Nobel Foundation in 1968 from Sveriges Riksbank on the bank’s 300th anniversary. It is also awarded by the Royal Swedish Academy of Sciences. It is expected to be awarded on October 10. We have 1212 guests and no members online