Claiming the Democratic Future: Unifying Voices for a New Frontier 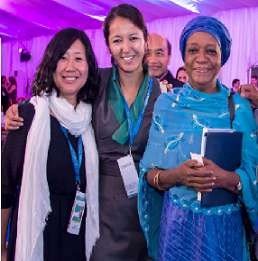 The 11th Global Assembly of the World Movement for Democracy will convene hundreds of democracy activists, experts, parliamentarians, and donors from all regions of the world in Taipei, Taiwan to strengthen solidarity in their efforts to build a more democratic future. Participants will engage in a wide range of practical workshops and panel discussions to share expertise in building resilient democratic institutions and defending civic space. Under the theme “Claiming the Democratic Future: Unifying Voices for a New Frontier,” the Global Assembly will build greater unity of effort to counter today’s authoritarian challenges and help foster democratic momentum.

The Global Assembly will also bring together the next generation of committed democrats, who will share their visions for a democratic future. The meeting in Taipei will be preceded by the What’s Next Initiative, a series of youth consultative meetings taking place in multiple regions of the world from May through August, in which young democracy leaders will debate and enunciate tactics to make those visions a reality. The outcomes of these discussions will be brought to the Global Assembly to further strategize collective action to achieve their democratic ambitions.

In addition to the What’s Next Initiative, the World Movement will be holding another series of dialogues ahead of the Global Assembly to reimagine civic space advocacy. In these meetings, civil society leaders will convene to reflect on trends regarding civic space, identify new challenges, and renew advocacy strategies.

The discussion will include, but not be limited to, digital space for civic and political participation, a battle of narratives for democracy and civil society, and the protection of information space for democracy. With civil society activists, policymakers, and donors, the Assembly will be a platform to formulate action plans to claim the democratic space.

A highlight of the Global Assembly is the presentation of the World Movement’s Democracy Courage Tributes, which honor movements that demonstrate extraordinary courage in their work, but which are often outside the spotlight of world attention. Previous Democracy Courage Tributes honored advocates for the Rohingya People; Nightwatchers–Photojournalists in the Philippines; the advocates for the Rule of Law in Africa; and Cuba’s San Isidro Movement. Read more about past recipients here.

To learn about past World Movement Global Assemblies, click here.

We have 631 guests and no members online