Kyiv, Oct.1.– Serhiy Haidai, the Ukrainian government’s governor for Luhansk Oblast — currently under near-total Russian control — claims that around 5,000 Russians are trapped in Lyman, in the neighbouring Donetsk Oblast, according to Ukrainian media.

“As of October 1, 2022, the Russian military stationed in Lyman appealed to their command with a request to withdraw but got a refusal. Over 5,000 Russian troops are now encircled,” Haidai wrote on Telegram, suggesting surrender or a bloody attempt at a breakthrough were now the Russians’ only choices. 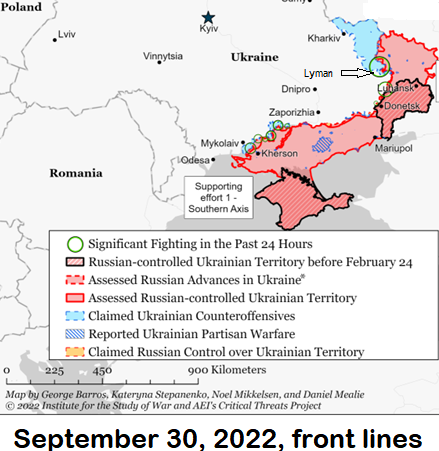 Lyman is important because it is the next step towards the liberation of the Ukrainian Donbas. It is an opportunity to go further to Kreminna and Sievierodonetsk, and it is psychologically very important,” explained Serhii Cherevatyi, spokesman for Ukraine’s eastern forces, in comments quoted by euronews.

The U.S.-based Institute for the Study of War predicted that the Ukrainians would take the city within three days on September 30th.
(...)

We have 1098 guests and no members online