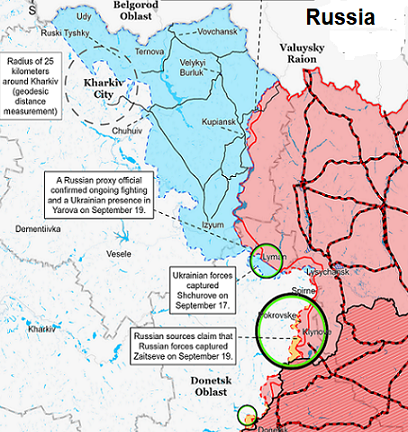 In blue the territory gained by the Ukrainian offensive of the last 10 daysto legally and openly deploy conscripts already in the Russian military to fight in eastern and southern Ukraine. 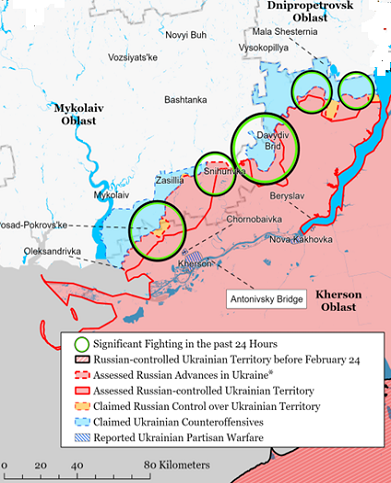 Ukrainian forces continued efforts to interdict Russian ground lines of communication (GLOCs) in Kherson Oblast on September 19 and 20 as Russian troops continue attempts to reconstitute their GLOCs. Ukrainian officials reported multiple Ukrainian air and artillery strikes against Russian manpower and equipment concentration in the Berislav, Henichesk, Kakhovsk, and Kherson districts among other areas, as well as on bridges and pontoon and barge crossings.[27] Ukraine’s Southern Operational Command reported that Ukrainian artillery strikes disrupted Russian attempts to establish alternative crossing sites across the Dnipro River around Nova Kakhovka and Kozatske (both 60km east of Kherson City) and that one of the strikes hit a Russian barge loaded with weapons, equipment, and personnel.[28] Social media imagery analysis confirms that the Russians have been trying to establish an alternative crossing point near the Kakhovka Dam from at least September 2 through September 18.
(...)

We have 1218 guests and no members online