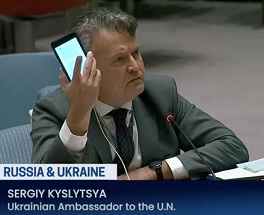 Before I try to deliver parts of the statement that I came here with tonight — most of it is already useless, since 10 p.m. New York time — I would like to cite Article 4 of the U.N. Charter. And it says:

«Membership in the United Nations is open to all other peace-loving states which accept the obligations contained in the present Charter and, in the judgment of the Organization, are able and willing to carry out these obligations.»

Russia is not able to carry out any of the obligations. The ambassador of the Russian Federation three minutes ago confirmed that his president declared a war on my country. So before I read parts of my statement, I would like to avail the presence of the secretary-general and request the secretary-general to distribute among the members of the Security Council and the members of the General Assembly the legal memos by the legal council of the United Nations dated December 1991, and in particular, the legal memo dated 19th of December, 1991. The one that we've been trying to get out of the secretariat for a very long time and were denied to get it.

The Article 4, paragraph 2 of the charter reads:

«The admission of any such state to membership in the United Nations will be effected by a decision of the General Assembly upon the recommendation of the Security Council.»

It would be a miracle if the secretariat is able to produce such decisions.

There is nothing in the Charter of the United Nations about continuity, as a sneaky way to get into the organization.

So when I was coming here an hour ago or so, I was intending to ask the Russian ambassador to confirm, on the record, that the Russian troops will not start firing at Ukrainians today and go ahead with the offensive. It became useless 48 minutes. Because about 48 minutes ago, your president declared war on Ukraine.

We have 580 guests and no members online