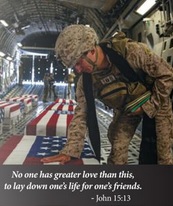 Washington, DC, Dec. 10.– On 27 August as flags flew at half-staff over the Edwin Cardinal O'Brien Pastoral Center in honor of the 13 U.S. Military members killed outside Hamid Karzai International Airport in Kabul, Afghanistan, His Excellency, the Most Reverend Timothy P. Broglio, Archbishop for the Military Services, USA (AMS), issued the following statement:

“Receiving the news about the tragic loss of Marines and a Corpsman in Afghanistan while in San Diego for the first AMS convocation of 2021, I immediately joined the assembled priests to pray for the repose of their souls and the consolation of their families. Together we beg the Prince of Peace for a time of dialogue and a profound respect for the priceless value of human life.”

On 17 August, His Excellency commented on the Taliban takeover:

“The fall of Afghanistan and the departure of its elected leaders are a cause for concern, because of the possible denial of human rights, particularly for women and girls. My two visits to the country confirmed my impression regarding the sacrifices, even including death, made by many members of the Armed Forces and civilians striving to bring stability and peace to the people there. At the moment, however, we can only pray for the Afghani people, support any humanitarian efforts that are in place there (especially through Catholic Relief Services), and give voice to local leadership on all sides. The human dignity of these people must be respected.

“Naturally, I am particularly concerned about those in the U.S. Armed Forces who continue to defend refugees and assets in the country. We pray that there will be no violence and a peaceful departure for all of those desiring to leave.” V 10 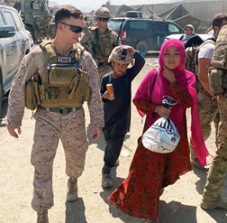 Father Daniel J. Swartz guarding afghan childrenFather Daniel J. Swartz, CHC, LT, USN, is here pictured with Afghan refugee children at the Kabul airport. Father Swartz accompanied the 2nd Battalion, 1st Marines to Afghanistan for the evacuations, and was present there on Thursday, 26 August, when a suicide bomb killed 11 U.S. Marines, a U.S. Navy Corpsman, and a U.S. Army soldier along with dozens of Afghans.

Father Swartz, upon his arrival in Afghanistan and seeing fellow U.S. service personnel helping Afghan refugees evacuate their homeland said, “Never have I seen such valiant sacrifice in the midst of so much desperation and suffering.” But, he added, “This was ultimately answered by evil and death on the day of the attack at Abbey Gate. It was as if the Crucifixion was being reenacted before my eyes.”
—U.S. Marine Corps Photo

back to top
Let the people know the facts and the country will be safe.
Abraham Lincoln

We have 349 guests and no members online