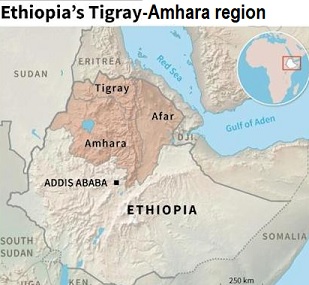 Makele, Oct. 30.– The Tigray People's Liberation Front (TPLF) said on Saturday that its forces have taken control of the strategic city of Dessie in Ethiopia's Amhara region. However, the Ethiopian government has denied the claim.

Earlier in the day, residents in the city told Nation.Africa that they had seen TPLF fighters entering the city which has been the centre of fighting for weeks.

Earlier, Reuters quoted rebel spokesman Getachew Reda as saying that Tigray forces had pushed government forces out of Dessie and took control of the city.

Electricity and telephone services have been cut off since Saturday afternoon.

The government's communications office, however, dismissed the rebel claims saying that TPLF forces had not captured Dessie ...

[ Full text ]
Editor's Note: The Tigrayan People's Liberation Front (TPLF) is a political party in Tigray, Ethiopia, that has been listed as a perpetrator in the Global Terrorism Database, based on several incidents since 1976. It is a core party within the Ethiopian People’s Revolutionary Democratic Front (EPRDF) coalition. However, on 18 January 2021, the National Election Board of Ethiopia terminated the party's registration, citing acts of violence and rebellion committed by the party's leadership against the Federal government in 2020, as well as a lack of representation. On 6 May, House of Peoples' Representatives in Ethiopia formally approved a parliamentary resolution designating the TPLF as a terrorist organization.

We have 913 guests and no members online