October 9 (DP.net).– All eight winners of the 2021 Nobel Prizes in medicine, chemistry, physics and literature awarded in Sweden, and the Nobel Peace Prize awarded to two winners in Norway have been announced this week. The 2021 Prize in Economic Sciences has not been awarded yet. It will be announced on Monday 11 October, 11:45 CEST at the earliest.

David Julius, of the University of California at San Francisco, and Ardem Patapoutian, of Scripps Research at La Jolla, Calif., got the 2021 Nobel Prize in Physiology or Medicine for their independent discoveries of receptors for temperature and touch that give us our ability to sense heat, cold and touch.

The Nobel Prize in Chemistry was awarded to Benjamin List, of the Max-Planck-Institut für Kohlenforschung, Mülheim an der Ruhr, Germany, and to David W.C. MacMillan, of Princeton University, USA, for the development of asymmetric organocatalysis, a precise new tool for molecular construction.

The Nobel Prize in Literature was awarded to Abdulrazak Gurnah for his uncompromising and compassionate penetration of the effects of colonialism and the fate of the refugee in the gulf between cultures and continents. Gurnah was born in Zanzibar but arrived in England as a refugee at the end of the 1960s. 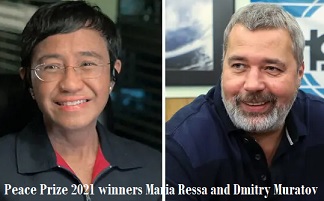 and Dmitry Muratov. According to the Norwegian Nobel Committee, they decided to award this Prize to both journalists «for their efforts to safeguard freedom of expression, which is a precondition for democracy and lasting peace. Ms. Ressa and Mr. Muratov are receiving the Peace Prize for their courageous fight for freedom of expression in the Philippines and Russia. At the same time, they are representatives of all journalists who stand up for this ideal in a world in which democracy and freedom of the press face increasingly adverse conditions.»

We have 497 guests and no members online