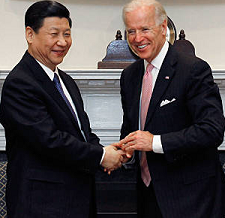 Beijing, Sept.16.– China on Thursday expressed outrage at a new security pact between Australia, the U.K. and the U.S., blasting what it considers a new Western provocation and singling out Australian troops as the first to die as a result of "Beijing's countermeasures so as to send a warning to others."

"Australia has turned itself into an adversary of China," China's English-language Global Times, considered a mouthpiece for the Chinese Communist Party, proclaimed in an editorial Thursday morning.

"If Australia dares to provoke China more blatantly," it added, "or even find fault militarily, China will certainly punish it with no mercy."

The violent rhetoric came a day after the leaders of the three Western powers announced the new alliance, dubbed "AUKUS." In joint remote remarks Thursday evening, President Joe Biden noted that the awkward AUKUS acronym "sounds strange" but that the effort nonetheless "will update and enhance our shared ability to take on the threats of the 21st century just as we did in the 20th century: together."
(...)

We have 383 guests and no members online