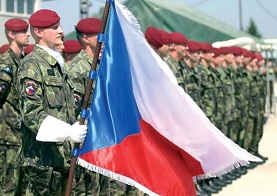 Prague, July 29.– The Czech Army has been in Afghanistan for a long time. Now that they returned, they left behind a lot of those who helped them, but are not officially a part of the Czech Army. This group is usually made up of locals who decided to join the side of the coalition forces as interpreters and guides. They promised to turn against the Taliban and hoped that the Czechs would return the favor by protecting them and their families from the jihadi tyrants.

A document was signed during many of their interviews, in which Czech Republic officially promised this. However, since the coalition forces are set to fully retreat before September 11th, the only way Czechia can save these good souls is to give them asylum in the Czech Republic.

According to many, it should have done so already, since Taliban now advances through the territories abandoned by the coalition forces with haste. A group of Czech celebrities, including signatories of Charter 77, called for the Czech government to keep its promise as soon as possible.

Yesterday, even the President urged the government to act fast as he is afraid that by delaying the decision to offer asylum to these individuals any longer, we could be betraying about 50 of those who supported us and essentially giving them a death sentence. The government has yet to respond.

We have 907 guests and no members online