Washington alarmed while two Iranian warships crossed the Atlantic by mid June but the mainstream press did not react. 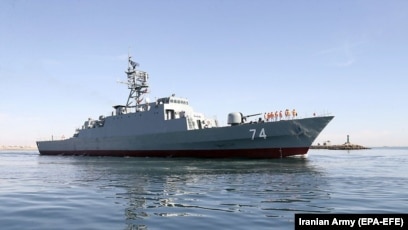 Cape Town, July 3.– Both Iranian warships were sighted when crossing in front of Cape of Good Hope, South Africa, on the night of 9/10 June 2021 on their way to the open Atlantic Ocean.

The Iranian ships, the destroyer Sahand and the intelligence-gathering vessel Makran, reached the south Atlantic on June 11th, likely en route to Venezuela, which has increasingly become an economic and military partner of Tehran. Iran has friendly relations with Cuba, where the ships could make a port call. The Sahand is able to voyage for five months without resupply.

However, the Iranian navy ships originally headed toward Venezuela changed course on June 16th steaming northeast up to the west coast of Africa, U.S. officials said.

The ships, which U.S. officials believe may have been preparing to conduct an arms transfer, have appeared to change course several times during their journey from Iran — and could do so again.

U.S. officials believe the course change indicates that a diplomatic campaign to urge governments in the Western Hemisphere to turn away the ships were successful, a defense official briefed on the situation, who spoke on condition of anonymity to discuss a sensitive subject.

The website TankerTrackers.com recently informed it had assessed that the ships are now headed to Syria to participate in naval exercises with Russia. The site estimated the ships will pass the Strait of Gibraltar on July 4, which is the two-year anniversary of the seizure of the Grace 1 supertanker as it also sailed toward Syria.

But whether or not the ships ultimately cross the Atlantic, their journey so far has been a significant demonstration of the naval capability of Iran, a longtime U.S. adversary that has sought to make inroads in Latin America.

Last week marked the first time Iranian warships had rounded the Cape of Good Hope; none has ever successfully crossed the Atlantic or circled around the entire coast of Africa.

We have 483 guests and no members online