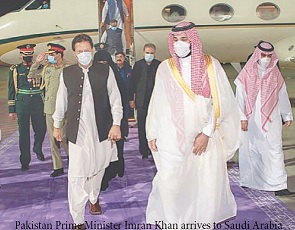 Islamabad, May 8.– Pakistan and the Kingdom of Saudi Arabia on Friday renewed pledge to enhance cooperation between the two countries in different fields.

Prime Minister Khan arrived at Jeddah Airport on a three-day official visit. It is the Prime Minister’s third official visit to Saudi Arabia since he came to power in 2018. The prime minister was warmly received by Saudi Crown Prince and Defence Minister Mohammed bin Salman.

Earlier in the day, Chief of the Army Staff Gen Qamar Javed Bajwa held meetings with the Saudi leaders. According to an agreement signed after the Prime Minister’s arrival, the two sides decided to form a ‘Supreme Coordination Council’ to have close coordination between the two states.
(...)

back to top
Tweet
No weapon in the arsenals of the World is so formidable as the will and moral courage of free men and women.
Ronald W. Reagan