Vienna, May 2.– Lawlessness swept over the streets of Paris on Saturday, with left-wing protesters smashing windows and lobbing stones and fireworks at riot police. The cops have responded in 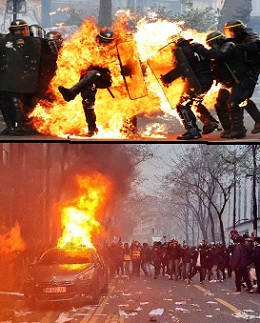 kind, charging and clubbing the rioters.

May Day protesters took over the streets of multiple French cities, with the worst of the early clashes happening in the city of Lyon. By mid-afternoon, however, Paris was the epicenter of unrest, as ‘black bloc’ anarchists marching alongside the traditional trade unionists and workers’ groups started smashing banks and shops in the capital.

Heavily armored riot police were nearby and responded with force. Video footage shows a squad of cops charging with shields raised to drive a crowd of vandals away from a bank.

Protesters were seen shooting fireworks at the police, and pelting officers with bottles and stones. The same officers who dispersed the crowd from in front of the bank were temporarily driven back, and another group of cops were seen huddled together under a barrage of projectiles.
(...)