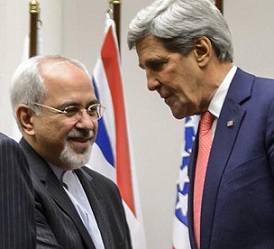 The audio revealed that Zarif acknowledged that Kerry had confided him with information that Israel attacked Iranian assets in Syria “at least 200 times.”

Excerpts taken from Politico.com summarize the encounter as follows:

“According to the audio, Zarif added that he was surprised that Kerry would reveal that sensitive information to him ... Kerry — the former secretary of state, Massachusetts senator and Democratic presidential nominee — serves as Biden’s climate envoy on the NSC and was a chief negotiator of the 2015 Iran nuclear deal ... His remarks to an Iranian academic were leaked by a London-based media outlet ... Kerry denied Zarif’s account in a tweet later Monday, writing: “I can tell you that this story and these allegations are unequivocally false. This never happened — either when I was Secretary of State or since.”

Such revelation by Politico.com is noteworthy because this is a traditionally moderate web site founded on a commitment to reporting the facts and only the facts, but leaning more and more since 2018 in favor of the radical socialist ideology. They also print a newspaper with a circulation of approximately 40,000, distributed for free in Washington, D.C. and Manhattan.

However. Kerry issued on Monday night (April 26th) a blanket denial of any such conversation. Notably, Kerry’s denial is different from that of the State Department. Kerry says the conversation never happened, while State Department spokesman Ned Price declined to specifically address the leaked audio. However, the conversation revealed was a private one between the Iranian Foreign Minister and another Iranian official. It was not intended for the public. Therefore, it was not intended to smear Kerry but as a private piece of information among Iranian officials.

It is important to remember that Kerry himself said in September 2018, shortly after Israel acknowledged the 200 strikes, that he had spoken with Zarif “three or four” times in the previous months. However, he changed his narrative in June 2019 when he told CNBC that he had only spoken with “one Iranian once” after Trump’s May 2018 decision to withdraw from the Iran nuclear deal, but saying as well that he had spoken briefly with Zarif at the Munich Security Conference in February of that year (2018). Therefore, it has been established that he held several conversations with Zarif well before the revealed audio.

Kerry’s advocates argue that Israeli strikes were vox populi and Kerry was just talking about something well known by the general public. If that is so, his motives are not clear on why would he deny the conversation. Indeed, it is known that Israel had struck Hezbollah "dozens of times" in Syria, but there was no official confirmation of the higher number of strikes up to this point. However, Israeli intelligence learned about the Kerry's leak and by September 2018, a senior Israeli official declared that more than 200 specifically Iranian targets were struck in the previous two years in Syria.

Iranian officials have been exultant since these revelations came public, allowing them to proclaim how “Israeli aggression” has been finally confirmed thanks to the irresponsible leak from John Kerry.