NAIROBI, Kenya (AP) — Bodies with gunshot wounds lay in the streets for days in Ethiopia’s holiest city. At night, residents listened in horror as hyenas fed on the corpses of people they knew. But they were forbidden from burying their dead by the invading Eritrean soldiers.

Those memories haunt a deacon at the country’s most sacred Ethiopian Orthodox church in Axum, where local faithful believe the ancient Ark of the Covenant is housed. As Ethiopia’s Tigray region slowly resumes telephone service after three months of conflict, the deacon and other witnesses gave The Associated Press a detailed account of what might be its deadliest 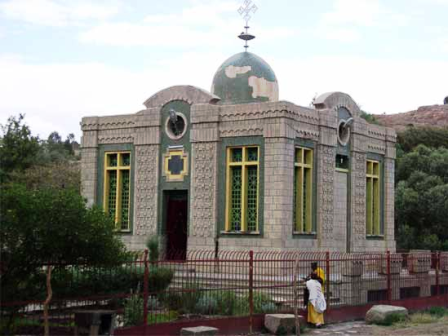 For weeks, rumors circulated that something ghastly had occurred at the Church of St. Mary of Zion in late November, with estimates of several hundred people killed. But with Tigray cut off from the world and journalists blocked from entering, little could be verified as Ethiopian and allied fighters pursued the Tigray region’s fugitive leaders.

The deacon, who spoke on condition of anonymity because he remains in Axum, said he helped count the bodies — or what was left after hyenas fed. He gathered victims’ identity cards and assisted with burials in mass graves.

The Chapel of the Tablet at the Church of Our Lady Mary of Zion in Axum allegedly houses the original Ark of the Covenant. Credit: Adam Cohn

He believes some 800 people were killed that weekend at the church and around the city, and that thousands in Axum have died in all. The killing continues: On the day he spoke to the AP last week he said he had buried three people.

“If we go to the rural areas, the situation is much worse,” the deacon said.