“Threatening to bring an entire country to its knees to agree to Facebook’s terms is the ultimate admission of monopoly power”. 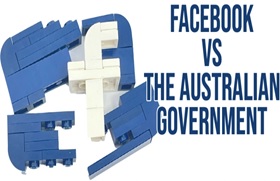 Feb.19.– World politicians have lambasted Facebook’s move to restrict Australians from sharing news on its platform, with some saying the tech giant has behaved in an “anti-democratic” way and more like a “dictator.”

Chairman of the U.S. House of Representatives subcommittee on Antitrust, Commercial and Administrative Law, David Cicilline (D-RI), wrote on Twitter that the move made it clear Facebook was not compatible with democracy.
(...)

A spokesperson for the UK government told The Epoch Times on Friday they encouraged Facebook and the Australian government to find a solution, while also decrying that the ban prevented access to health information during the pandemic.

“It is vital people can access accurate news and information from a range of sources, particularly during a global pandemic,” the spokesperson said.
(...)

back to top
Tweet
There will never be a really free and enlightened State until the State comes to recognize the individual as a higher and independent power.
Henry David Thoreau