Tens of thousands of farmers are demonstrating against laws they say benefit large private buyers at their expense. 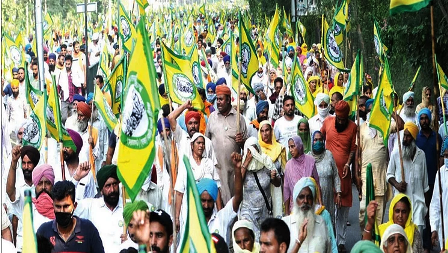 Tens of thousands of protesting Indian farmers have blockaded highways across the country as the United Nations called on authorities and protesters to exercise “maximum restraint”.

The farmers held a three-hour “chakka jam”, or road blockade, on Saturday at about noon local time (06:30 GMT) across the nation except in the capital New Delhi and a couple of neighbouring states.

“Today, the support of the whole society is with farmers,” Yogendra Yadav, a political activist who is one of the leaders of the farmers’ movement, said on Twitter. “Victory is certain.”

On a highway near the capital, some farmers smoked hookah as songs played on a loudspeaker.

Farmers squatted on the road in the eastern state of Odisha and Karnataka in the south with flags and banners protesting against the laws, with some carrying placards urging the government not to treat them as enemies.

Authorities deployed thousands of security forces mainly outside India’s capital, where farmers have camped at three main sites for more than two months seeking a repeal of new agricultural laws. They say they will not leave until the government rolls back the laws it says are necessary to modernise Indian agriculture.

“The rights to peaceful assembly & expression should be protected both offline & online,” the Office of the United Nations High Commissioner for Human Rights said on Twitter late on Friday.

“It’s crucial to find equitable solutions with due respect to #HumanRights for all.”