Jan.22.– President Donald Trump didn’t campaign in 2016 on a promise to confront the global spread of 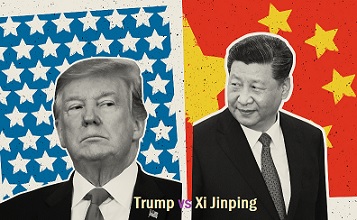 communism, but his efforts over the past four years against the Chinese Communist Party (CCP), its proxies, and other elements of the communist specter have become the centerpiece of his legacy.

Viewed through this lens, the “America First” slogan was a fitting one for a campaign against a communist adversary and a medley of the causes it has co-opted in a decades-long campaign to supplant the United States as the most powerful nation in the world.

The CCP has spent decades plundering American wealth through the theft of trade secrets, protectionist trade policies, and market distortion. The regime has used this wealth to fund a behemoth soft power campaign, undermining U.S. interests in every domain and gaining influence over multinational institutions.

Despite significant interference from within his own government, Trump confronted the menace head-on in China, around the world, and in the United States. When he campaigned for reelection in 2019, communism versus freedom was one of the key themes, but the economic disaster and global havoc caused by the CCP virus, forced other priorities to the forefront.
(...)