Kiev, Dec. 27.– At a press conference in Interfax Ukraine, the Member of the Parliament of Ukraine Andrii Derkach 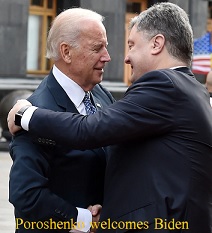 unveiled new records of conversations between “Biden and Poroshenko”. The main topics of the tapes released by Derkach, and now widely disclosed to the world, were the IMF loan guarantees, the operations of Naftogaz, tariff increases, the Burisma case, the nationalization of PrivatBank and others.

According to Derkach, on one of the records, Biden demanded that Poroshenko keep the CEO of Naftogaz NJSC, Kobolyev in place, whom the then Prime Minister Volodymyr Groysman wanted to dismiss. Poroshenko assured Biden that he would deal with this. Commenting on this record, Derkach stated that Kobolyev was backed by the Americans.

As for the Burisma Holdings' issue, Biden boasted in a television interview sponsored by the Council for Foreign Relations in 2018 about his pressure on the Ukrainian government to dismiss the Attorney General investigating that company in a corruption case.

The following video is from Ukraine, released to provide documentary and eyewitness information about the corruption involving the Biden family. The video is long —over an hour— and not all of it involves the Biden family, but other cases of corruption under the former Ukraine's President Poroshenko.

With that intro, here's the video; and readers may also visit Nabu Leaks  for more information, enlarged pictures of the relevant documents naming the Bidens, audio of phone calls between Biden and former President Poroshenko, and the full transcript of the press conference.