He is trying to reinvent himself as the voice of the umma (ie, Muslims everywhere) and 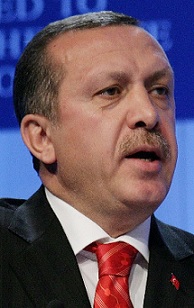 also of the world’s poor.

Istambul, Sept. 8.– President Recep Tayyip Erdogan likes to cut to the chase. Others may think the multilateral dispute over territorial waters, continental shelves and hydrocarbons in the Eastern Mediterranean, which has brought Turkey close to war with Greece, is complicated. For Turkey’s leader, however, it is simply an “example of modern colonialism” by European countries, as he put it in a speech on September 1st. “The era of those who for centuries have left no region unexploited from Africa to South America, no community unmassacred and no human being unoppressed is coming to an end,” he added.

Mr Erdogan has long fulminated against the West to stir up patriotic support at home. Now, he is increasingly addressing a global audience, too. Having failed to reshape the Middle East in the wake of the Arab spring, Mr Erdogan is looking elsewhere for greatness. He is trying to reinvent himself as the voice of the umma (ie, Muslims everywhere) and also of the world’s poor.

His efforts so far have focused mostly on Europe. Turkey has traditionally seen itself as a protector of ethnic Turks in countries like France, Belgium and Germany. More recently, Mr Erdogan has started to think bigger.

“Turkey is trying to position itself as the main patron of all Muslims in Europe,” says Sinem Adar, a researcher at the German Institute for International and Security Affairs. The policy has already worked in the Balkans, where Turkey has competed against Gulf money for the sympathy of Bosniaks, Albanians and Kosovars, but is relatively new elsewhere.
(...)