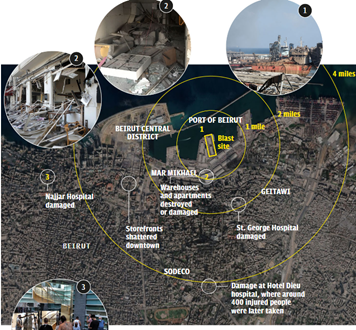 Authorities have hinted at poor storage of explosive material left after a ship was seized in 2014.

Beirut, Aug.5.– The timer was ticking from six years ago, when 2,700 tonnes of ammonium nitrate were taken from an impounded ship and stored in the port of Beirut. It was a massive bomb just waiting to go off; a disaster equivalent to an earthquake measuring 3.5 on the Richter scale.

At least 100 are dead and an astonishing 4,000 are injured in a catastrophe in one of the Middle East’s greatest cities. About 300,000 more are homeless.

And all because Igor Grechushkin, the Russian owner of the Rhosus ship, carrying the deadly cargo from Georgia to Mozambique, declared bankruptcy on an unscheduled stop, and was forced to abandon it there. It left the authorities with a fearsome problem, and one they appear to have dealt with by crossing their fingers and hoping for the best.
(...)