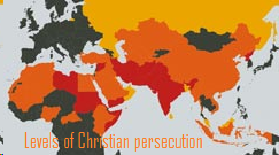 Budapest, Dec.30.– Despite being the most persecuted religious minority in the world, Christians suffering persecution are often overlooked in the media and hardly given priority or special attention in government policy. This is particularly the case in Western countries whose foundations are, ironically, by and large Christian.

So why is there this dearth of coverage? In this interview in Budapest with the National Catholic Register at a conference on persecuted Christians, professor Paul Marshall, explains that various factors are in play.

Prof. Marshall holds the Jerry and Susie Wilson Chair in Religious Freedom at Baylor University. The main factors in Christian persecution, he says, include “secularization theory,” which implies religion is “going to disappear,” ignorance among diplomats and journalists, and the culture wars, which have been projected onto non-Western persecuted Christians.

Why does the issue of persecuted Christians seem to be hardly covered in the media? Some in the media say it’s a “ratings killer” — does it, therefore, reflect a lack of interest among the public?

Two things: One, I would say, is that there is interest among the public; maybe not among professionals in the media, but among audiences there’s strong interest in religion stories, but the media usually doesn’t want to provide them. There is also interest in stories of persecution. I know people who are not Christians and not so involved in this, but they get struck by those matters.

Why is there also lack of compassion on this issue in many parts of the West?
(...)