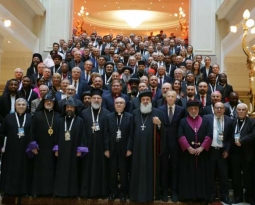 Some of the religious leaders & hierarchy assisting to the Conference Budapest, Hungary, Sec.20 (DP.net).- Patriarchs, cardinals, politicians, and Christians from across the globe convened in Budapest on the week of Nov. 26-28 for the second International Conference on Christian Persecution.

“We have 245 million reasons to be here. This is how many people are persecuted daily because of their Christian belief,” Hungarian State Secretary for the Aid of Persecuted Christians Tristan Azbej said Nov. 26 as he opened the conference. Azbej has been a driving force behind Hungary Helps, a government initiative to provide international aid specifically to persecuted Christian communities in the Middle East -- distinguishing Hungary from most European governments.

This conference draw together many Syrian, Iraqi, and Lebanese Christian leaders, including Patriarch of the Syriac Orthodox Church of Antioch Ignatius Aphrem II, Chaldean Catholic Archbishop of Mosul Najeeb Michaeel, and Rev. Joseph Kassab, head of the Evangelical Community of Syria and Lebanon.

Bishop and Primate of the Armenian Orthodox Diocese of Damascus Armash Nalbandian highlighted in his address that the targeted persecution of Christians is still a very current threat in Syria. “Not even one month ago, a gunman shot dead Fr. Hovsep Bedoyan the head of the Armenian Catholic community in Syria, Qamishli, near the border of Turkey and his father, Abraham Bedoyan ... The attack was claimed by the Islamic State group,” he said. “The local media reported three bombings in Qamishli, which occurred the same day of the assassination, and were also claimed by ISIS, showed concern that militants were also coordinated attacks against Christians in the city,” he added. 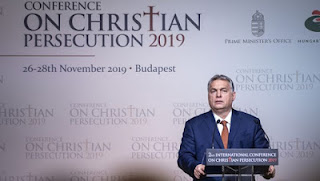 PM Orban at the opening of the Conference

Hungarian Foreign Minister Péter Szijjártó recalled that in the past year 2,625 Christians were arrested without any legal grounds in different parts of the world. Attacks on Christian churches numbered more than 1,200. From Szijjártó’s speech it became clear that the Orbán regime defines “Christian phobia” and “hatred of Christians” in the broadest possible sense. Hungarian politicians consider intolerance of the Christian set of religious beliefs to be “persecution.”

In 2017 Hungarian aid to persecuted Christians in the Middle East exceeded 7 million euros. The program to aid persecuted Christians has been pursued with full force. In April of this year, “The Hungary Helps Agency” was established. Its task is to coordinate programs to help persecuted Christians. From a modest 10-member team in 2017, a large agency emerged, which moved with the prime minister to his new quarters in the Castle District of Buda. The agency signed an agreement with the United States Agency for International Development (USAID), but, according to a government document, finding European partners, other than Poland, for the projects was quite difficult.

The Orbán government not only spends money on projects that help Christian churches in the Middle East and Africa, but it is spearheading a campaign against the persecution and oppression of Christians all over the world.