MEPs celebrated the reforms that enhanced democracy and expanded people’s rights in the EU with Presidents Sassoli, Michel and von der Leyen. 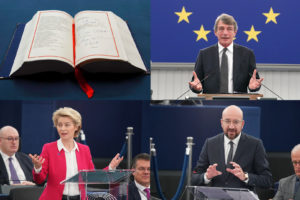 Debate in the European Parliament on the Lisbon Treaty

Brussels, Dec.17.– At the beginning of the formal sitting, EP President David Sassoli highlighted the role that the Lisbon Treaty and the Charter of Fundamental Rights play in maintaining peace and prosperity in Europe. He added that the upcoming Conference on the Future of Europe presents an opportunity to address persisting and new challenges through a stronger Europe, based on solidarity and freedom.

During the round of interventions by political group speakers, MEPs representing a broad majority in parliament stressed that the EU needs to be reformed and strengthened in order to address citizens’ concerns, ranging from the environment and climate change to social issues, and from European defence, security and foreign policy, to the rule of law, democracy and citizens’ rights.

Wrapping up the debate, Commission President Ursula von der Leyen and European Council President Charles Michel welcomed the increased democratic accountability that the Lisbon Treaty introduced and acknowledged that citizens need to be at the very centre of the European Union. Speaking about the upcoming Conference on the Future of Europe, both of them called for it to be used to listen to citizens and to change the EU by reforming it where needed.

You can catch up with the debate through the following links ...