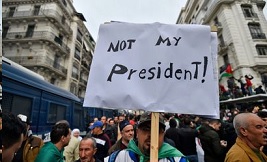 Thousands take to the Streets in Algeria Beirut, Dec.13.– Protests have renewed with fresh momentum in Algeria as a former prime minister has been elected as president, despite over ten months of anti-government demonstrations to force the old political elite out.

Thousands took to the streets with fresh vigour after around 60 per cent of the country boycotted the election.

The North African country went to the polls on Thursday for a delayed presidential election, despite protesters demands that the vote be further delayed until the entire political establishment and the army’s role in politics has been removed.

“Civil state, no to a military state,” protestors reportedly chanted.

Abdelmadjid Tebboune, who also served as a housing minister under the recently removed President Abdelaziz Bouteflika, as well as briefly being premier, was announced as the new president on Friday.
(...)