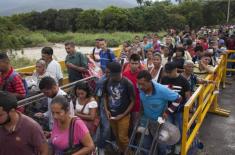 More than 80,000 Venezuelans cross the Colombian border each day looking for food and medicine.

Washington DC, Oct.24.– As the Trump administration has turned the screws on Venezuelan strongman Nicolás Maduro, it has had a staunch and eager ally in neighboring Colombia.

The South American nation has its own troubles (guerrillas, political assassinations, soaring coca production, and a stumbling peace deal), but it has good reason to worry about Venezuela.

Not only are Venezuelans fleeing to Colombia in record numbers, but Colombia says its hostile neighbor is providing a safe haven to guerrillas bent on destabilizing the Iván Duque administration in Bogotá.

“The threat of Venezuela — and the instability that Maduro wants to create in Colombia — are very clear,” Francisco Santos, Colombia’s ambassador to the United States, told the Miami Herald. “It’s an existential issue for Colombia.”
(...)