territory to the Russians before Turkey suceeds in taking it.

Manjib, Oct. 14.– The U.S. military has begun a hasty exit from Syria's northern city of Manbij, and is set to help Russia establish itself there amid a Turkish attempt to defeat Kurdish-led, Pentagon-backed fighters at the strategic location, Newsweek has learned.

The U.S. was scheduled as of Monday to officially withdraw from Manbij within 24-hours, leaving the mostly Kurdish Syrian Democratic Forces behind as two rival factions—the Syrian government, backed by Russia and Iran, and the Turkey-backed Syrian insurgents opposed to it—sought to seize control of the strategic location. A senior Pentagon official told Newsweek that U.S. personnel, "having been in the area for longer, has been assisting the Russian forces to navigate through previously unsafe areas quickly." 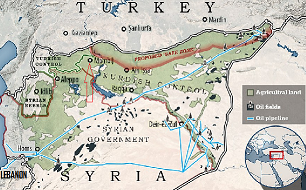 "It is essentially a handover," the official said. "However, it's a quick out, not something that will include walk-throughs, etc., everything is about making out with as much as possible of our things while destroying any sensitive equipment that cannot be moved."

As Syrian troops and allied militias moved to team up with Kurdish-led forces in the city, opposition fighters began their own advance toward Manbij. Reports have since begun to emerge of clashes between the two sides, signifying a new front in the country's multi-sided conflic.
(...)