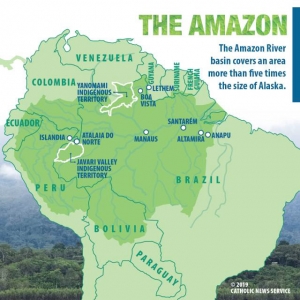 Vatican, Oct. 11.– There were four Synod participants on the podium in the Holy See Press Office this Friday afternoon, each of them sharing their impressions of the discussions so far, and responding to journalist’s questions, reported Vatican News.

Cardinal Carlos Aguiar Retes of Mexico opened his presentation with a call for “ecological conversion”. Climate change has amplified the “cry of the poor”, he said, and an “integral ecology” is the Church’s response. The Cardinal explained that an integral ecology means a change of lifestyle, abandoning the throwaway culture. It is essential we increase awareness, he said, because it is the poorest people on earth who are being affected.

Archbishop Pedro Brito Guimarâes, of Palmas, Brazil, said he comes from Brazil’s youngest State, in the heart of the country. 1.5 million people live there, along with 9 million heads of cattle. The cattle, said the Archbishop, often enjoy better healthcare than the people.

That’s because their meat is exported to countries overseas. The primary animal feed in the region is soybean meal, but

overplanting has had a negative impact on the earth, said Archbishop Pedro. The land is eroded, while pesticides and chemicals used to grow the soy have polluted the rivers. Cattle raising also requires a lot of water, and this too risks destroying natural resources.

Archbishop Pedro went on to speak of what he called “ecological sins”. They may be something new, he said, but we need to start confessing them. Quoting Pope Francis, he added how “everything is connected”, when you touch something you create a chain reaction, he said. The whole of humanity will feel the effects of decisions taken at this Synod, concluded the Archbishop.

Bishop Joaquín Pertíñez Fernández of Rio Branco, Brazil, began by emphasizing he comes from an area that crosses two time zones. The Bishop went on to speak about the history of his Amazon Region, which is not well known, he said. This is partly because the local culture is based on wood, rather than stone, so things disintegrate more easily. He spoke of coming of a land of martyrs where someone is “buried under every tree”. Bishop Fernàndez described how the people of this area were enslaved. Forced to sell their produce to their employers, they were trapped in a situation from which they rarely escaped alive, he said.

The Church was not present in this “place of human suffering”, explained the Bishop, because of the distances and lack of communication ...