Bashar al-Assad is engaged in a murderous assault on Idlib, the last province to withstand him. Thanks to the Russian intervention, he is on the verge of retaking Idlib province, the last rebel stronghold. Against all odds, he has won the struggle against the uprising. But it is a hollow victory. Far from bringing order to his country, Mr Assad has displaced half its population. 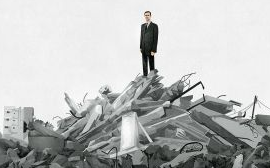 lives. Mr Assad has nothing good to offer his people. They will be wretched and divided. He will govern by fear and brutality. For as long as he clings to power, he will stoke regional strife and jihadist terrorism that will be felt far beyond Syria’s borders.

"Assad or we burn the country.” For years Bashar al-Assad’s troops have daubed that phrase onto walls in the towns they recapture. The insurgents pushed the dictator to the brink. But Mr Assad shrugged off the empty threats of Western leaders, and enlisted the help of Iran and Russia. True to his slogan, he destroyed whole cities and gassed and starved his own people. What rebels remain are holed up in Idlib province. It, too, will soon fall. Against all the odds, the monster has won.

Yet it is a hollow victory. Far from bringing order to the country, as the Russians and Iranians claim, Mr Assad has displaced half the population. Eight years of civil war have destroyed the economy and cost 500,000 lives. Mr Assad has nothing good to offer his people. His country will be wretched and divided. The consequences will be felt far beyond its borders.

The precise moment of Mr Assad’s triumph will be determined in Idlib. About 3m people live there, many of whom fled fighting elsewhere. The area is controlled by the hardest-core rebels, jihadists linked to al-Qaeda, who will not go quietly. That, too, is a legacy of Mr Assad’s ruthlessness. He released hundreds of jihadists from prison in 2011, hoping that they would taint the once-peaceful, multi-confessional uprising ...