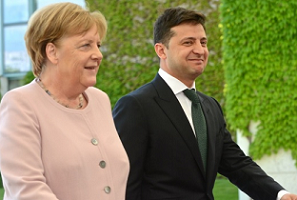 Berlin, June 18.– German Chancellor Angela Merkel met with Ukraine's newly elected President Volodymyr Zelensky on Tuesday and expressed her support for continuing to sanction Russia for its interference in Ukraine.

Zelenskiy is meeting with key European leaders this week in an attempt to gin up support for Ukraine's struggle against Russian aggression and interference.

Speaking at a joint press conference with Zelenskiy on Tuesday, Merkel noted that Russia continues to occupy the Crimean peninsula, which Moscow illegally annexed from Ukraine in 2014, and supports pro-Russian separatists in the eastern part of the country known as the Donbas.

"As long as there is no progress on this front, the sanctions cannot be lifted, and the sanctions related to Crimea can only be lifted if Crimea returns to Ukraine," Merkel said.
(...)