Kurds in Turkey: A bitter war

Since July’s failed coup against Erdogan, the war between the government and the PKK has grown more bitter

A divided Kurdistan fights to restore their repressed identity

Diyarbakir (The Economist).─ A century and a half of Kurdish history stares at Altan Tan from the photographs in his office on the outskirts of Diyarbakir, the heart of Turkey’s restive south-east. His great-grandfather, a merchant who shuttled between Aleppo and Anatolia in the waning years of the Ottoman Empire, inspects the room from one frame. His father, tortured to death in a state prison after an army coup in 1980, looks up from another. Just two years ago Mr Tan, an engineer and member of parliament, had reason to think Turkey’s Kurds were on the verge of a brighter future. He was a key player in the peace negotiations between Turkey’s government and Abdullah Ocalan, the imprisoned leader of the outlawed Kurdistan Workers’ Party (PKK), which seemed about to bring the decades-long war between the government and the PKK to a close.

That was before the summer of 2015, when a ceasefire between the PKK and the Turkish army collapsed, unleashing the worst bloodletting in two decades. At least 2,100 people, many of them civilians, have died in the clashes since July 2015. Insurgent strongholds, including swathes of Diyarbakir’s historical centre, have been pummelled by artillery fire and razed to the ground. The south-east’s economy is on its knees. From his office balcony, Mr Tan looks out over rows of vacant apartment blocks and hotels, relics of a building frenzy interrupted by the fighting. “Construction, trade with Syria and Iraq, and tourism have all stopped,” he says. Meanwhile a new front in the conflict has opened across the border in Syria. On October 20th Turkish jets bombed areas claimed by the PKK’s local affiliate, the People’s Protection Units, and claimed to have killed up to 200 fighters. 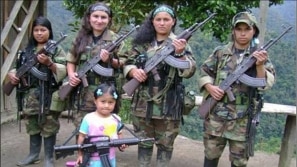 Teenagers recruited by the FARC

Bogota, Nov.19.─ When on October 2nd a narrow majority of Colombian voters rejected a peace agreement under which the FARC guerrillas were to disarm, it was not just a pollster-confounding shock. It was also a rebuke to the government of Juan Manuel Santos, to negotiators who spent four tough years working on the accord and to the international establishment, which had praised the accord. Thus stung, Mr Santos’s people and the FARC’s leaders went back to the table. On November 12th they came up with a revised agreement. Will it command wider public support?

According to Mr Santos, the result is a “renovated, adjusted, more precise and clarified” accord that takes account of many of the objections of the critics, led by Álvaro Uribe, his predecessor and now his chief foe. It is even longer—310 pages instead of 297—but its essence remains the same. The FARC will disarm and become a civilian political party. FARC leaders found guilty of war crimes will not be sent to jail; instead, they will face alternative penalties involving “effective restrictions of liberty”, provided they confess their deeds before a special tribunal.

"The American people have made their decision on the next President of the United States, members of Congress as well as state and local officials. I congratulate Mr. Trump and everyone elected yesterday.

Now is the moment to move toward the responsibility of governing for the common good of all citizens. Let us not see each other in the divisive light of Democrat or Republican or any other political party, but rather, let us see the face of Christ in our neighbors, especially the suffering or those with whom we may disagree.

Mr. Cunha, 58 years old, was indicted earlier this year on charges of corruption and money laundering. Prosecutors alleged that he pocketed millions in bribes from a company seeking contracts with oil firm Petróleo Brasileiro SA, or Petrobras.

The time has come to widen our political and intellectual horizons, writes Muxe Nkondo

Johannesburg, Oct.17.─ Both participatory democracy and professional expertise are defining values of South African society. Although many social scientists have tried to understand the two as mutually supportive, the tension between participatory democracy and professional expertise has long been a critical theme in South African politics.