Donald Trump’s tariffs on steel and aluminium would be just the start of a trade war.

Mar.8.– Donald Trump is hardly the first American president to slap unilateral tariffs on imports. Every inhabitant of the Oval Office since Jimmy Carter has imposed some kind of protectionist curbs on trade, often on steel. Nor will Mr Trump’s vow to put 25% tariffs on steel and 10% on aluminium by themselves wreck the economy: they account for 2% of last year’s $2.4trn of goods imports, or 0.2% of GDP. If this were the extent of Mr Trump’s protectionism, it would simply be an act of senseless self-harm. In fact, it is a potential disaster—both for America and for the world economy. 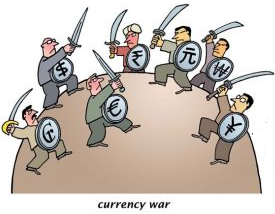 As yet it is unclear exactly what Mr Trump will do. But the omens are bad. Unlike his predecessors, Mr Trump is a long-standing sceptic of free trade. He has sneered at the multilateral trading system, which he sees as a bad deal for America.

El Pakatan Harapan (malayo for: Pact of Hope)
abreviated as PH, is a left-center electoral coalition
founded in September 2015.

The good governance list from civil society leaders is topped by public access to information and the declaration of assets by politicians before taking office.

Petaling Jaya, Mar.5.– A group of civil society leaders today presented a memorandum of demands to Parti Pribumi Bersatu Malaysia (PPBM), urging the opposition to fulfil them if it wins the 14th general election (GE14).

Center to Combat Corruption and Cronyism (C4) director Cynthia Gabriel said the NGOs had been working for six to seven months on good governance agendas for political parties to commit to before GE14.

The demands, she said, comprised five points topped by public access to information.

Transparency International released their annual Corruption Perceptions Index, which measures the perceived levels of public sector corruption in 180 countries and territories. The results are scored on a scale from 0 to 100, where 0 is “highly corrupt” and 100 is “very clean.” 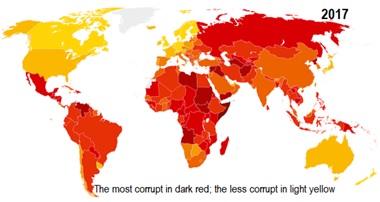 This year’s average corruption perception score was 43, showing no improvement from their 2016 report. Despite this, some countries have made significant individual strides, such as Afghanistan, whose score has increased by seven points within the last six years. Western Europe proved the most successful region, with an average score of 66, while Sub-Saharan Africa only reached an average of 32.

Utilizing this information, Transparency International provided analysis concerning what factors coincided with higher corruption levels. For example, they discovered that countries with the highest rates of corruption also maintained the least protections for members of the media. Although each region faces some unique challenges, one piece of advice underscored each region’s findings: “Civil society has a crucial role to play.” See where your country scored on their interactive corruption perceptions map.

Corruption has played a pivotal role in sustaining appallingly high levels of poverty in many developing countries, particularly in relation to the deficient provision of basic services such as education and health care. It is also a major reason why growth-rate increases in Africa and South Asia, have failed to benefit large segments of the population, and some low growth-rate countries in Latin America, such as Venezuela, Cuba and Nicaragua, keep the vast majority of their population in a situation of extreme misery.

Corruption drives the overexploitation of natural resources, capturing their value for a small elite—whether timber from Indonesia or coltan from Congo. In the developed world, corrupt funding undermines political systems and lays policy open to heavy financial lobbying. Dominik Duka has had on removing barriers between the state and the church, whose copy CTK has received from Zeman's spokesman Jiri Ovcacek.

Prague, Mar.1 (CTK).– Czech President Milos Zeman sent a letter to Pope Francis praising the impact Cardinal Dominik Duka has had on removing barriers between the state and the church, whose copy CTK has received from Zeman's spokesman Jiri Ovcacek.

A few days ago, Zeman said on TV Barrandov he wanted to ask the Pope to prolong Duka's mandate, responding to a letter by several Czech Catholic activists who criticised Duka and asked the Pope not to prolong his mandate.

The decision to scrap term limits for China’s president, Xi Jinping, pierces the veil of Chinese politics and the chinese leader will be allowed to reign forever. 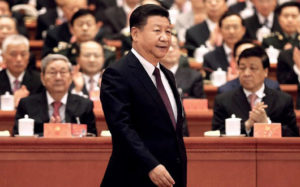 Beijing, Feb.26.– The decision announced on February 25th to scrap term limits for China’s president, Xi Jinping, pierces the veil of Chinese politics. It reveals that, at a time when the ruling Communist Party is presenting China to the world as a modern, reliable and responsible state, capable of defending globalisation, the internal political system that the party monopolises is premodern, treacherous, inward-looking and brutal. It also shows that Chinese leaders’ own attempts to make the party otherwise have not got far.

Those attempts began in the 1980s under Deng Xiaoping, then the country’s paramount leader. In order to encourage predictability and institutional stability after the chaos of the last years of Mao Zedong, Deng introduced a series of reforms which stressed rules and norms, instead of strongman decision-making. The reforms included mandatory retirement ages and term limits for high-ranking politicians. The constitution of 1982 says the president “shall serve no more than two consecutive terms”.