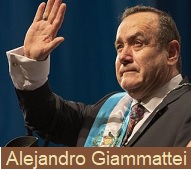 announced this last Tuesday that his government is breaking diplomatic ties with the Venezuelan government of President Nicolas Maduro and ordered the closure of its embassy in Caracas.

“We have instructed the foreign minister that the only person left in the embassy in Venezuela should return, and that we definitively end relations with the government of Venezuela,” Giammattei said. “We are going to close the embassy.”

Giammattei’s announcement came after a meeting with the head of the Organization of American States, Luis Almagro.

“It is an issue that concerns the entire continent,” the new president said. However, the conservative Giammattei, who took office last Tuesday, had already indicated during his campaign that he would cut ties upon assuming power.

Giammattei's inauguration was attended by María Romero, a representative of Juan Guiadó, the Venezuelan opposition leader recognized as that country’s interim President by the United States and more than 50 other nations after he was recognized as such by the Venezuela's National Assembly.

Venezuelan Foreign Minister Jorge Rodriguez, in a response on Twitter, accused Giammattei of bowing down to the administration of U.S. President Donald Trump. “His government will surely become another bad joke,” Rodriguez wrote. “Our respect and affection is for the people of Guatemala.”

Giammattei, who won a run-off election in August, told reporters his incoming administration is ready to recognize opposition leader Juan Guaido as Venezuela’s legitimate President. “I think it’s the right thing to do. There are other South American [governments] that will do the same,” he said, without going into further detail.

back to top
Tweet
If the machine of government is of such a nature that it requires you to be the agent of injustice to another, then, I say, break the law.
Henry David Thoreau