He was the commander of the West Group, one of the four top Russian commanders in Ukraine. He previously served during the Russian intervention in the Syrian Civil War.

Kyiv, Oct.29.– It has been revealed that Lieutenant General Andrei Sychevoi was captured with his driver during Eastern Ukraine's offensive last September as he was trying to flee back to Russia in a stolen civilian car. He tried turning his epaulet stars sideways and claiming to be a LtCol, but his driver kept calling him “general” and captors were able to fully identify him.

He had replaced the commander of the Russian "Western Military District", Colonel-General Alexander Zhuravlyov. who was fired by Putin last July.

Ukrainian authorities gave Sychevoi two choices. He can collaborate completely, or he can end up remanded to The Hague for war crimes trial before the International Criminal Court.

Apparently, he has decided to give his full collaboration because he would have been replaced anyway on account of his massive failures in the Eastern front. Either way, he will never see Russia again. 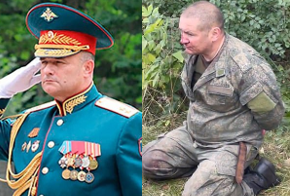 General Andrei Sychevoi capturedSome details of his collaboration have been leaking. He has admitted on how depleted their supplies were and how undermanned and demoralized their combat units. His troops were depleted by death, desertion, and combat stress. On Aug. 30 the force was at only 71% of full strength. Some other units were far worse off. “There were no supplies of munitions or drones." Some of his written notes show the coordinates of Russian intelligence units, records of calls from commanders, details of battles, men killed and equipment destroyed. And accounts of a breakdown in morale and discipline.

Colonel General Alexander Lapin is the new Commander of the Russian Western Military District since 19 September.

Datos del mercado por TradingView
We are fast approaching the stage of the ultimate inversion: the stage where the government is free to do anything it pleases, while the citizens may act only by permission; which is the stage of the darkest periods of human history, the stage of rule by brute force.
Ayn Rand

We have 693 guests and no members online