British intelligence services are now reportedly reassessing their position on the theory that COVID-19 leaked from a lab in China’s Wuhan Institute of Virology. A Sunday report from the Sunday Times of London quotes British spies who initially dismissed the lab leak theory, but now say it is "feasible.

There might be pockets of evidence that take us one way, and evidence that takes us another way," the paper quoted a source as saying. "The Chinese will lie either way." Previous theories suggesting that the coronavirus jumped into people from bats via an intermediary animal have been debunked.»

U.S. State Department warning: Don’t ‘Open a Can of Worms’ on the COVID-19 Origin. 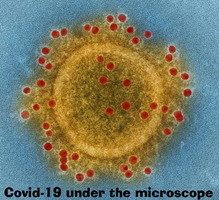 June 3.– Vanity Fair found evidence that some figures within the U.S. State Department did not want a complete investigation into the virus’s origins in early 2020; it appears to have found one of the smoking guns of this entire abominable story of the COVID-19 pandemic, suggesting that in early 2020, some corners of the federal government explicitly discouraged a full investigation into how the pandemic started:

A months long Vanity Fair investigation, interviews with more than 40 people, and a review of hundreds of pages of U.S. government documents, including internal memos, meeting minutes, and email correspondence, found that conflicts of interest, stemming in part from large government grants supporting controversial virology research led by Dr. Fauci, hampered the U.S. investigation into COVID-19’s origin at every step.

In one State Department meeting, officials seeking to demand transparency from the Chinese government say they were explicitly told by colleagues not to explore the Wuhan Institute of Virology’s gain-of-function research, because it would bring unwelcome attention to U.S. government funding of it.

In an internal memo obtained by Vanity Fair, Thomas DiNanno, former acting assistant secretary of the State Department’s Bureau of Arms Control, Verification, and Compliance, wrote that staff from two bureaus, his own and the Bureau of International Security and Nonproliferation, “warned” leaders within his bureau “not to pursue an investigation into the origin of COVID-19” because it would “‘open a can of worms’ if it continued.”
(...)