Donald Trump’s Israeli-Palestinian peace plan, which envisions Israel incorporating hundreds of Jewish settlements alongside and within an independent Palestinian state in exchange for some other border territories. However, Netanyahu’s rushed push for annexation so far has deepened the chasm in Israel's relations with its neighbors. Gulf Arab officials and observers accuse Mr. Netanyahu of jeopardizing a careful and unprecedented thawing of ties that Gulf leaders pursued with Israel at the expense of their own domestic politics.

The Real chance of promoting an Arab-Israeli Peace Plan
by Gerardo E. Martínez-Solanas

The Palestinian Authority, from the time of Arafat to the present day, has lost the opportunity to establish an independent State due to the intransigent way it has refused to include the recognition of the State of Israel in a Peace Treaty and to accept –while it was still possible to do so– the West Bank borders established after the 1967 six-days war.

In fact, since the time of the partition sanctioned by the United Nations, the Palestinians and neighboring Arab states refused to accept the existence of the State of Israel and attacked once and again since the 1948 war through several other subsequent wars with the intention to erase the Jewish state from the map. However, the Israelis won every one of those wars, sometimes fighting on three fronts.

These wars of aggression against the Jewish state have provoked in the population of Israel a feeling of extreme urgency that prompts them to establish secure borders that guarantee their safety and survival. Even during times of truce between wars, Israel has been subjected to constant harassment at its borders and repeated missile bombardments of its populations from Gaza, Lebanon and Syria. This violence has only served to exacerbate Jewish extremism, which is now reflected in its own rulers.

The current leaders of the State of Israel have taken advantage of this intransigence to blatantly opt for a triumphalism that feeds a spirit of conquest that further distances them from peace and harmony in the region. The Netanyahu Annexation plan would completely encircle the Palestinians in the West Bank, cut off Palestinian water and agricultural resources from the Jordan River and speed up the construction of settlements in the Jordan Valley. In addition, his government would not proceed with a two-state solution as conceived in Trump's peace plan. This overwhelming Israeli policy is just the perfect strategy to spread even more hatred and intransigence on the other side. 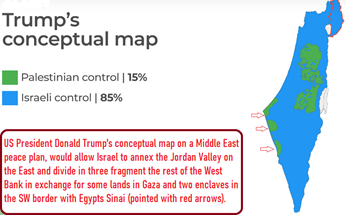 Take a look at US President Donald Trump's conceptual map on a Middle East peace plan. This is a plan that has been taking shape for many months and for long aspired to provoke reasonable objections from the Palestinians in order to serve as the basis for conversations and a counter proposal in which they pledged to recognize the State of Israel in return for a formal acceptance by the Jews of the establishment of more reasonable borders that would allow the new Palestinian State a stable and truly independent existence. This plan even included the construction of a tunnel (paid with Israeli funds) connecting Gaza with the West Bank.

But the Palestinians chose to neither negotiate nor elicit any kind of promise for the recognition of Israel. For his part, Netanyahu has opted for the hard line of unilaterally annexing this coming July 1st even more territories than the Trump peace plan contemplated as a starting point for discussions aimed to reach an agreement including more concessions to the Palestinians. Netanyahu's decision places Trump and the United States government in an unsustainable situation that could cause a serious isolation of the State of Israel to face alone the hostility of practically all the rest of the world.

It is a pity that the extremist attitude of both parties destroys a possibility of dialogue, compromise and peace. The doors of even bloodier wars that cause widespread misery and the exodus or death of millions are again opened wide by the irresponsible intransigence of the leaders who are leading both sides to destruction and ruin.

On the contrary, a real peace and an existence as good neighbors –with the promise that Israel had made in the past to provide economic and technological assistance to all who want to accept their existence and friendship– would allow a remarkable development of progress and well-being in the region.

There is still time to reconsider. Some Arab countries appear to be ready to support a peace project that does not require the 1967 borders, but does establish borders for a reasonably integrated Palestinian territory endowed with the necessary hydric and other natural resources. It is still possible to promote cooperation instead of war!

Perhaps this is the very last chance.