The United States is developing a new policy of approaching the former Soviet republics of Central Asia in response to their manifest concern caused by Chinese and Russian hegemonism. In addition, nurturing new friends in that region can contribute to a more stable Afghanistan and some level of cooperation in the face of the Iranian threat. In fact, Washington views Uzbekistan as an emerging leader in pushing for a peace deal in Afghanistan. Nevertheless, Russia has significant influence in Central Asia through “soft power”. Russia is looked at as a political model by many Central Asian governments and a legislative trend-setter. After the election of Donald Trump, an acute domestic political crisis began in the United States (strong disagreements between him and the Democratic Party), so Central Asian foreign policy direction waned during part of the last three years. That is not so any longer. More recently, Secretary of State Pompeo is conducting a vigorous policy of renewed friendship in the region."

A New Era of Strategic Partnership:
The US Engages to Find Opportunities in Central Asia

Central Asia will generally welcome —and want— U.S. attention, but will want a degree 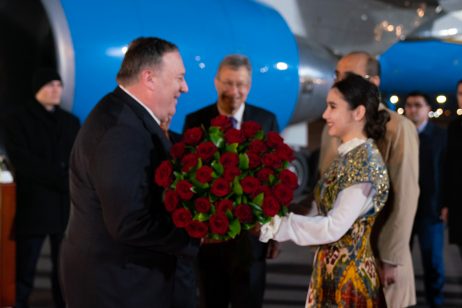 Taskent, Feb.14.– U.S. Secretary of State Mike Pompeo’s early February visit to Kazakhstan and Uzbekistan marks a notable achievement for Central Asia: The United States is keeping an active eye on the region. An increased number of visits to the former Soviet republics has occurred in recent years, with U.S. officials voicing interest in strengthening relations.

The State Department declared in a December special briefing that it had “intensified [its] bilateral diplomatic engagements with Central Asia” this past year. However, the

Trump administration may experience a difficult time with its current strategy if key parties are not involved. During the meeting between the foreign ministers of all five Central Asian republics and Pompeo earlier this month, one important regional power not only was absent, but was negatively singled out – China.

The former Soviet republics in Central Asia have tended to pursue foreign policies characterized as “neutral” or “multivector,” terms that essentially mean the countries look to build their sovereignty, independence, and prosperity without annoying or becoming dependent on any major global power. As they have become more self-confident, the region’s leaders have begun to promote the value of regional cooperation, as well as, in a number of cases, historic reforms. These developments have attracted international attention.

This was evident from the dialogue at early February’s meeting of the Central Asian leaders; in addition to conversations with Pompeo, they discussed joint border security and regional efforts to improve economic and energy connectivity among each other and with neighboring countries, something which inevitably includes China. Pompeo seemed quite wary of the conversational inclusion of Beijing, and did not shy away from expressing his thoughts on the region’s eastern neighbor. He even declared the Chinese Communist Party the “the central threat of our times” during a visit to London to kick off the trip that ended in Central Asia ...