It is true that climate change has taken place dramatically over the course of the Earth's 4.5 billion-year history. However, we are witnessing an increasingly rapid change. The kind of changes that would normally happen over hundreds or thousands of years are presently happening in decades. This much faster warming corresponds with levels of carbon dioxide in the atmosphere, which have been increasing since the industrial revolution. So, when people talk about climate change today, they mean anthropogenic (man-made) climate change. This is the warming of Earth’s average temperature as a result of human activity. This is the legacy we are leaving to our children and grandchildren with our greed for cheaper resources, he overwhelming machinery of unsustainable progress and our neglect reflected in the phrase "I will not live to see it." The most reprehensible aspect of this negligence is that the most affected by our  decisions today are precisely our own children. This report by Time Health shows us in a nutshell the effects of global warming on their susceptible wellbeing. 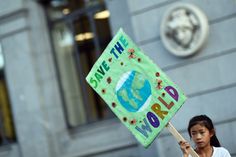 Global temperatures are continuing to rise—and the health of children is being clobbered in the process. In a sweeping study just published in The Lancet, investigators from 35 institutions—including the World Health Organization, Imperial College London, The University of York, Yale University and Iran University of Medical Sciences—analyzed the planet’s climatological health on 41 indices, such as the rising incidence of floods, wildfires and mosquito-borne diseases; adaptation and mitigation steps being taken to address the problems; and economic resources being devoted to that work. They found that while progress is being made, too many trend lines continue to point downward. We will all pay a price for that, but today’s children will pay the highest.

“With every degree of warming, we are committing a child born today to a future where their health and well-being will be increasingly threatened,” says Dr. Renee Salas of the Harvard University Global Health Institute, lead author of the Lancet policy brief that accompanied the study. “Climate change, and the air pollution from fossil fuels that are driving it, threaten a child’s health starting in their mother’s womb and only accumulate from there.”

One of the most damaging examples of that cumulative phenomenon is the microscopic particulate matter produced by burning fossil fuels. The study found that more than 90% of the world’s 2.2 billion children are exposed to particles at concentrations above the safe limit defined by the World Health Organization. Drawing their first breath in a world like that leaves them at a higher lifetime risk of developing asthma, pneumonia and chronic obstructive pulmonary disease. And while the air is, on average, cleaner in wealthy countries like the U.S. than it was 50 years ago, the world as a whole is becoming more urbanized, with 70% of the global population expected to be living in cities by 2050—precisely where the air is dirtiest.

Rising temperatures, the leading indicator of climate change, do their own brand of pediatric damage. Children’s bodies are less adept than adults at regulating temperature ...

Divide me by Zero

This book is at least ½ reality and perhaps ½ fiction, but even if it isn't fiction, it may be read as an interesting and sort of biographical novel, full...