Thailand is a country located in the centre of mainland Southeast Asia.
Located wholly within the tropics, Thailand encompasses diverse ecosystems,
including the hilly forested areas of the northern frontier,
the fertile rice fields of the central plains,  the broad plateau of the northeast,
and the rugged coasts along the narrow southern peninsula.
Until the second half of the 20th century, Thailand was primarily
an agricultural country, but since the 1960s increasing numbers of people
have moved to Bangkok, the capital, and to other cities.
This kingdom was never brought under foreign domination
and preserves its independence until this day. 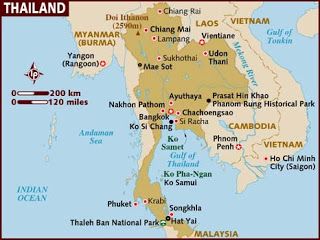 Businesses and investors in advanced and green industries are choosing Thailand for its ecosystem for success.

Bangkok, Oct.22.– There was a time when Thailand was best known for exports of rice, garments and textiles, rubber products, electric appliances and combustion-engine vehicles. But times have changed. Today, the Kingdom of Thailand is increasingly recognized for biotechnology, cutting-edge medical equipment, electric vehicles, robotics and artificial intelligence, blockchain and financial technology.

Thailand is welcoming investment in high-technology and green industries, and investors in those industries are keen on the change taking place in the Kingdom.

This rapid and sweeping transformation is part of a 20-year national strategy, a blueprint for the future designed to foster innovation and creativity, research and development, advanced technologies and green industries. Businesses that are part of the Fourth Industrial Revolution (4IR) are already emerging as strong drivers of the economy. Their contributions are among the reasons Thailand’s global rankings for competitiveness and sustainability are on the rise.

The Switzerland-based International Institute for Management Development (IMD) ranked Thailand 25th in its 2019 World Competitiveness Index, a five-rank rise. And the United Nations placed Thailand 40th in the world and first in Southeast Asia in its latest Sustainable Development Goals Report, an improvement of 19 places.

The government has also implemented supportive policies for advanced and green industries. Aside from generous investment incentives and privileges ...