May.20.– As the illegal alien crisis along the southern border worsens, distressing government figures show that nearly half of all federal crimes in the United States are perpetrated by foreigners who are not American citizens and that immigration cases account for the largest single type of offense. Non-U.S. citizens committed 42.7% of all federal crimes in 2018, according to a report issued by the United States 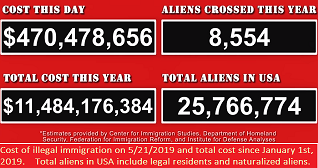 Sentencing Commission, the independent agency created by Congress decades ago to reduce sentencing disparities and promote transparency and proportionality in sentencing.

The document also reveals that 54.3% of the 69,425 federal offenders last year were Hispanic. “Immigration cases accounted for the largest single group of offenses in fiscal year 2018, comprising 34.4% of all reported cases,” the agency writes in its annual report to Congress. “Cases involving drugs, firearms, and fraud were the next most common types of offenses after immigration cases.

Together these four types of offenses accounted for 82.9% of all cases reported to the commission in fiscal year 2018.” The second largest offense category, drugs, accounted for 28.1% of federal crimes last year and most cases involved methamphetamine. Judicial Watch has reported for years on the enormous amounts of meth that enter the U.S. through Mexico. A few years ago the Department of Homeland Security (DHS) reported an eye-popping 300% increase in meth seizures coming from Mexico in one border state alone.

In 2018 Hispanics committed 9,020 federal drug trafficking crimes, nearly twice as many as those perpetrated by blacks (4,670) and more than double the drug trafficking offenses carried out by whites (4,499). Hispanics were also charged with more drug possession crimes (389) last year than any other group. Not surprisingly, Hispanics also committed the overwhelming amount of immigration related crimes, according to the recently issued federal statistics. Of the 23,656 immigration offenses recorded last year, Hispanics accounted for 22,782. They also committed the most money laundering crimes (504) compared to whites (444) and blacks (236), the Sentencing Commission document shows. The figures only include convicts that actually got sentenced ...

[ Full text ]
** The U.S. Sentencing Commission, a bipartisan, independent agency located in the judicial branch of government, was created by Congress in 1984 to reduce sentencing disparities and promote transparency and proportionality in sentencing.