Global warming is a gradual increase in the overall temperature of the Earth's atmosphere generally attributed to the greenhouse effect caused by increased levels of carbon dioxide, chlorofluorocarbons, and other pollutants. According to the NASA, sunlight passes through the atmosphere and warms the Earth surface; this heat is radiated back toward space. But then, most of the outgoing heat is absorbed by greenhouse gas molecules and re-emited towards the Earth and warming its surface. "On Earth, human activities are changing the natural greenhouse. Over the last century the burning of fossil fuels like coal and oil has increased the concentration of atmospheric carbon dioxide (CO2) ... Warmer conditions will probably lead to more evaporation and precipitation overall ...  [ Read more ]

“A cold snap in the teeth of global warming is no more unusual than a cool day in summer. Both happen,” one climate scientist said.

Jan.29.– The massive cold weather front that has descended over the Midwest this week has commentators straining for analogies (“deep freeze,” “arctic outbreak” and “ice age”), and at least some people wondering what has become of global warming.

President Donald Trump and radio provocateur Rush Limbaugh seemed bemused by the notion that the climate is warming at a time when most of America is hunkering down against subfreezing temperatures. 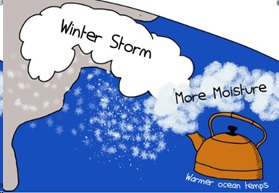 But climate experts, including those inside Trump’s government, said the record-setting cold does nothing to contradict the consensus on climate change. According to a tweet Tuesday morning from the National Oceanic and Atmospheric Administration: “Winter storms don't prove that global warming isn't happening.”

The discussion of climate and weather, and how much one influences the other, has become charged at a time when some political conservatives have rejected the scientific consensus about climate change: that greenhouse gases have warmed Earth’s atmosphere and helped fuel heat waves, extreme storms, droughts and extreme wildfires ...