The EU’s great project may not survive another crisis, but it is already entering one. The euro zone doesn't have the fiscal or banking unions it needs to make monetary union work, and it's not close to changing that. In the meantime, the €uro's continuing flaws continue to suck countries into crisis. And their politics get radicalized. Not counting the Brexit's commotion. The euro zone isn't what economists call an "optimal currency area". Its different members are different enough that they should have different monetary policies. But they don't. Ten years after the world financial crisis of 2009, interest rates remain low (negative), monetary policy is far from normal with no room for decreases to stimulate the economy if a crisis happened. The European Central Bank (ECB) could engage in more quantitative easing, but it will likely face opposition by some countries – and ECB President Mario Draghi will not be around, as he will step down by October 2019. Fiscal policy is in no better place. Euro governments continue to struggle with high debt levels, leaving little room for a fiscal policy stimulus if a recession happens."

Brussels, Jan. 5.– The €uro is a survivor. The new currency, brought into being on January 1st 1999, has defied early critics, who thought it doomed to failure. It has emerged from its 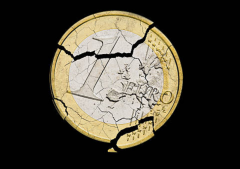 turbulent teenage years intact, cheating a near-death experience, the debt crisis of 2009-12. It is now more popular than ever with the public. But fundamental tensions attended its birth. Although the euro has made it this far, they still hang over it. If Europe’s single currency is to survive a global slowdown or another crisis it will require a remodelling that politicians seem unwilling or unable to press through.

To its supporters the bold economic experiment was the culmination of half a century of European co-operation and a crucial step towards an “ever closer union” that would unite a continent once riven by conflict. “Nations with a common currency never went to war against each other,” said Helmut Kohl, Germany’s chancellor who, together with France’s president, François Mitterrand, championed monetary union in the 1990s to cement deeper political and economic integration.

Each member brought its own hopes and fears to the union. To the French it was a way of taming the economic might of a newly reunified Germany and the power of the Bundesbank. To the Germans, who feared they would eventually foot the bill for profligate southerners, the prize was a stable currency and an end to competitive devaluations by Italy. To the Italians, Greeks and other southerners, monetary union was a means of borrowing the inflation-fighting credibility of the Bundesbank, on which the European Central Bank (ECB) was modelled ...