The United States is a republic, not a democracy. We owe this distinction to the ageless wisdom of the Founding Fathers. Think about it this way; suppose you live in a condominium building of ten apartment units. Nine of the units are occupied by a single person. The remaining unit is occupied by an extended family of ten.

The Electoral College is constituted every four years for the sole purpose of electing the President and the Vice President. The number of electors for each state equals the combined total of the state’s Congressional representation - the number of House members, plus the state’s two senators.

Together with the separation of powers, the Electoral College is fundamental to American federalism. Most states appoint their electors on a winner-take-all basis, based on the statewide popular vote. Currently, the Electoral College consists of 538 electors, and an absolute majority of 270 electoral votes is required to win an election.

The Founding Fathers were deeply concerned with the problems inherent in what James Madison called “the tyranny of the majority,” and they went to great lengths to design a republic not based on the will of the majority. The word ‘democracy’ was deliberately avoided by the Framers; it does not appear in the Declaration of Independence or in the Constitution.

With their government design, the Framers sought to protect individual rights, not only from government, but also from our fellow citizens. As Alexander Hamilton explained: “We are now forming a republican form of government. Real Liberty is not found in the extremes of democracy, but in moderate government.” With democratic governance, individual freedoms can be subverted by majority rule. The Constitution seeks to advance liberty, not democracy.

The Electoral College balances the competing interests of states with large and small populations. If the popular vote was the only vote that mattered, candidates would concentrate their efforts on densely populates states, ignoring smaller states and the less populated areas of the country. Without the Electoral College system, campaign economics would dictate that candidates campaign mostly in states with large urban populations and big media markets. Presidential candidates would behave as if many Americans did not exist.

To win an Electoral College majority, candidates must build a national coalition to gather support in various regions. Nationwide campaigning helps promote national cohesion, the orderly transfer of power, and the stability of our political system. 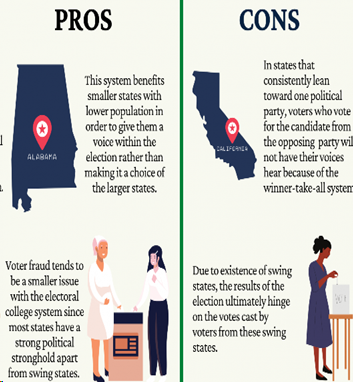 Abolishing the Electoral College requires a constitutional amendment, and to get around this impediment, some detractors are promoting a horrific plan that awards all the electoral votes of a state to the presidential candidate that wins the national popular vote. In essence, this National Popular Vote Interstate Compact (NPVIC) could contravene state voters by requiring a state to award all its electoral votes to a candidate that did not win a majority in the state. And yet, to date, twelve states have adopted the NPVIC.

When it comes to the Electoral College, we should defer to the wisdom of the Founding Fathers. After all, we should not forget that the crucifixion of Jesus Christ was an event of democratic popular support.

We have 747 guests and no members online