Seven months after proposing the economic plan for the solution of the Palestinian/Israeli conflict, the Trump administration presented a political plan — one which is substantially different than the previous ones and to a certain extent revolutionary.

A Palestinian state would be created in the entire Gaza strip, and 70% of the West Bank. 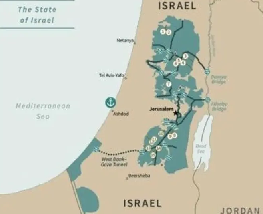 roads, bridges, and tunnels (including a connection between the West Bank and Gaza).

Holy sites would remain under Israel’s control, but Muslims would have free access to the al-Aqsa Mosque.

Israel would be able to keep existing settlements without uprooting them, but would stop new settlements for the next four years while negotiations between Palestinians and Israel occur over final status.

This would guarantee at least no further territorial expansion over the West Bank’s Area C.

Some of these settlements would be enclaves in the Palestinian state.

Likewise, Israel would be granted full security control in the Jordan Valley; would agree to some land swaps and would consent to absorb a limited number of Palestinian refugees in Israel.

It’s expected that approximately 97% of Israelis in the West Bank would be incorporated into Israeli territory.

Approximately 97% of Palestinians would be incorporated into a Palestinian state.

Palestinians could build their capital in parts of Jerusalem in the Arab neighborhoods located east and north of the existing security barrier.

No less sifnificant: If the Palestinians reject the plan, which is likely to be the case, the U.S would support an Israeli unilateral annexation of the settlements.

Once such a move occurs, Israel would abolish the military government in the West Bank.

The plan is supported by the main Israeli opposition, the Blue and White Party, but so far has been rejected by Palestinian leadership.

Those talks were either paralyzed or ended in the same place.

The Palestinians rejected concessions and peace offers by two Israeli prime ministers (Ehud Barak and Ehud Olmert) and two American presidents (Bill Clinton and Barack Obama). In turn, they placed unreasonable demands such as the “right of return” of Palestinian refugees and their descendants to Israel proper.

Barak proposed to create a Palestinian state on 90% of the West Bank and Gaza with an eastern border in the Jordan River, and agreed to give up permanent presence in the Jordan Valley. Clinton went further with the Israeli agreement.

Olmert offered to return 93% of the West Bank.

Furthermore, he had no better friend in the White House than Barack Obama.

During Obama’s tenure, Abbas refused to negotiate with Israel and contemptuously rejected Obama’s offers for an arrangement based on the 1967 borders with mutually agreed land swaps. Instead, the Palestinian leadership signed an agreement with the anti-peace group Hamas, seeking to delegitimize the role of the U.S as a mediator in the peace process.

The first positive element of the Trump proposal is that the Palestinians are finally paying a price for their refusal to accept compromises in the past.

What’s unique also about this plan is that if Palestinians do not engage in negotiations, Israel could proceed to unilaterally annex the settlements and there would be also a unilateral Israeli withdrawal from the West Bank. This would automatically create a de-facto Palestinian state.

Another major achievement of this proposal is that Arab states such as Egypt, Saudi Arabia and the Gulf states are accepting the plan at least as a basis for Palestinian/Israeli negotiations.

This means that the Palestinians can no longer count on the Arab world to rally around the Palestinian cause in support of maximalist demands. They seem to be preoccupied more with internal domestic affairs aggravated by the events of the Arab Spring and at the same time interested in cooperation with Israel against the dangerous destabilizing activities of Iran in the region.

The Palestinians would also see the flow of billions of dollars to make their state viable, as it was presented in Bahrain last June. This includes investment in infrastructure, and economic development in order to increase the Palestinian GDP and provide jobs to millions of Palestinians.

Arab states are expected to significantly contribute to such a project.

In addition, the overwhelming majority of Palestinians would no longer live under occupation.

The Trump Plan has broken the cycle of naïve proposals. Conceps insisting either on continuing the bi-lateral negotiations of the last 27 years or proposed a fanciful solution based on pressure on Israel.

On the other hand, the Palestinians have already pledged to join forces with Hamas in opposition to the plan.

In addition, since according to the plan, Israel would still have electronic and control of the Palestinian airspace and would be responsible for the security of Palestinian state borders, it could open the gates to giving excuses to Palestinian terror and international condemnations of Israel.

By the same token, the fact that Israel has control of key strategic assets does not guarantee the security of Israeli towns and populations vulnerable to terrorist attacks.

Likewise, in a de-facto autonomous or independent Palestinian state, the already weakened Fatah may face the dangers of a coup d’état from Hamas. This could leave behind a terrorist state similar to the one created by the Islamic State in Iraq and Syria.

But overall, the Trump plan is a good start. This time, with the support of Arab states the hope is that the Palestinians are persuaded to negotiate and put an end to a conflict that has worn out the Israelis, the Americans, the Arabs, and even — the Palestinians themselves.

back to top
Tweet
From the totalitarian point of view history is something to be created rather than learned. A totalitarian state is in effect a theocracy, and its ruling caste, in order to keep its position, has to be thought of as infallible.
George Orwell