In 1975, Fidel Castro launched “Operation Carlota” –according to official figures from Havana it would take 377,033 military personnel and over 50,000 civilian aid workers from 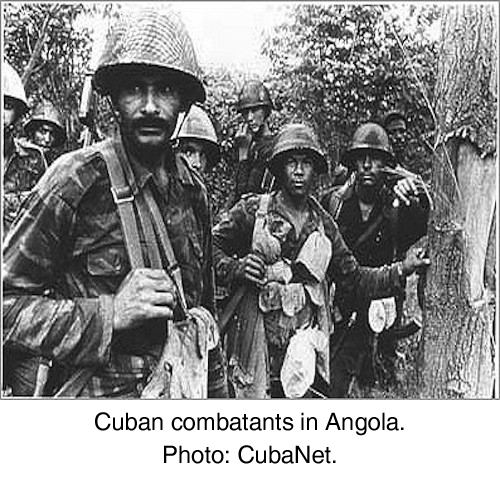 Cuba during the 16 years it lasted (1975-1991).[1] The official explanation for the Cuban intervention was that self-proclaimed Angolan president Agosthino Neto, a historical communist and ally of the USSR, had requested military aid from Cuba. The truth was otherwise. A former senior intelligence official of Cuba confirms that the Soviet Union (USSR) - which supported Cuba with billions of dollars a year- asked Fidel Castro to send the Cuban military force, promising to pay for all the war material. Portugal has initiated a process for the independence of its colonies in Africa and, the USSR was seeking to bring Angola into the Soviet orbit by consolidating Neto in power, but it was not convenient for the USSR to appear as the invading force supportive of Neto.[2] In the cold war scenario, the USSR supported Neto’s MPLA (Popular Movement for the Liberation of Angola) and the SWAPO (South African People's Organization), that was fighting for Namibia's independence, while the United States, together with

South Africa, supported UNITA (National Union for the Total Independence of Angola) and the FNLA (National Liberation Front of Angola).

Cuba did not act out in sheer revolutionary solidarity, it actually received payment for its services that are estimated between US $300 and US$ 600 million annually[3] (if so, this would represent between US $4.8 and US $9.6 billion in 16 years of struggle). The author of a recent book on the Angolan war, engineer Carlos Pedre –a former Cuban soldier in Angola– obtained a confidential testimony from a former FAR (Revolutionary Armed Forces of Cuba) officer that Angola was paying Cuba $2,000 per soldier per month.[4] Cuba also developed millionaire businesses, managed by senior FAR officials, through the systematic plunder of ivory, diamonds, and timber from Angola, as well as equipment newly arrived for various factories in Angola that was diverted to Havana.[5] It is an open secret that the Cuban military also "stole as much as they could," including vehicles, and home furnishings, and it is alleged that they were even trafficking drugs.[6]

Despite the high revenues Cuba was receiving for its “assistance” to Angola, it did not compensate most soldiers sent there; these were mostly very young recruits serving the obligatory military service, who only received the 7 Cuban pesos a month usually paid to all recruits in Cuba. Only officers above the grade of captain were paid, and only 600 kwanzas, while senior advisers and top officers received 900 to 1,000 kwanzas (one kwanza was about one U.S. dollar)[7]; unlike the officers, the soldiers did not have vacation and they had to serve for three years without returning to Cuba.[8) The writer Jorge Olivera Castillo, a veteran of Angola, explains: "Upon returning to Cuba, with the meager amount of money they gave us we were only able to buy one or two changes of clothes, some perfumes of poor quality, and a few items for personal hygiene. After that humiliation came winds of an Olympic forgetfulness."[9) 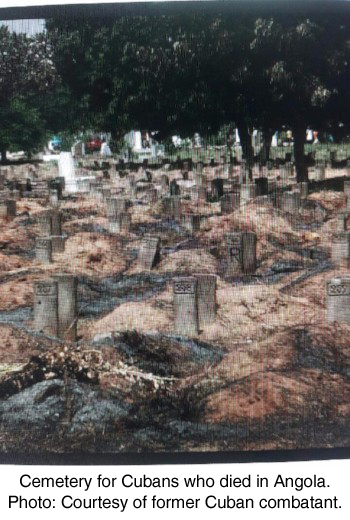 A large number of Cubans went to Angola on a journey with no return. According to the official press in Cuba, 2,085 died, including 204 civilians -doctors, paramedics, teachers and others.[10] However, the Cuban government has never published the official list of fatalities[11] and it remains a closely guarded secret. Veterans of war and some experts insist that the fatalities were many more. The documentary “Cuba: an African Odyssey,” containing filmic testimony from the main actors on the Cuban side, states that "military historians agree that at least 10,000 Cubans died in Angola."[12] Already in 1978, the Spanish newspaper El País reported that the Central Intelligence Agency (CIA) of the United States estimated that 1,400 Cubans had died in the first four years of Cuban intervention in Angola,[13] an intervention that went on for twelve more years. Jonas Savimbi, head of UNITA, reported 6,200 Cuban deaths in the war to 1986.[14] According to senior U.S. government officials in 1987, Cuban Brigadier General Rafael del Pino, who had just defected to the U.S., was reporting around 10,000 fatalities of Cuban troops in Angola, a figure coinciding with U.S. government estimates.[15] Regardless of the actual number, many died not in combat but by accidents, friendly fire caused by negligence and poor training, or diseases such as malaria and yellow fever; many others committed suicide, unable to withstand the terrible conditions.

Cuba also used its merchant ships to transport troops as well as the sick and wounded, in violation of international rules. They were hidden in the warehouses, in inadequate conditions, for voyages lasting 18 to 21 days. This caused even more human suffering and probably the death of many of the sick and injured.[16]

Since the onset of the war, transferring the remains of the dead to Cuba was forbidden. It was not until December 6, 1989, as the end of the conflict was being negotiated, that remains were transferred to Cuba in the "Operation Tribute." Each of Cuba’s 169 municipalities held honor burials in special pantheons.[17] War veterans, however, report that most of the fallen in combat were buried right on the spot and doubt that most remains were repatriated.[18] A former combatant, a pilot who served in Angola in 1983, reports that the Cubans’ bodies were buried without ceremony, unclothed (especially their boots were re-used), and right on the ground (with no coffins) at a special section of the Alto Las Cruces cemetery in Miramar, Luanda; when that filled up, another cemetery at the end of the airport runway was then used. He was familiar with the forensic work undertaken for the 1989 repatriations, but insists that remains included Cuban “internationalists" fallen in Ethiopia, Nicaragua, Algeria and other countries.[19]

Since there is no official list of the dead or missing and unofficial lists lack dates and causes of death, Cuba Archive has registered in its database not many documented cases of deaths of Cubans in Angola (see database.CubaArchive.org). However, among these cases are examples of the senselessness of many of these losses. For example, Lieutenant Julio Guerra, 24, a graduate of the flight school in Krasnador in the former USSR, was sent to the war in Angola to fly MIG 23BN aircraft, for which he had little training; in 1987, he disappeared in the jungle and his family never received an explanation of what happened. Raúl Quiala Castañeda had not yet learned how to fly at night when he was ordered to go out in the dark to bomb sites with fires near Luanda (indicating the presence of UNITA camps); he crashed and died, but his relatives were notified that he had died heroically in combat.

The far-away conflict brought huge revenues to the Castro regime, but it cost the Cuban people dearly. Thousands returned from the war mutilated, with psychological trauma, some even went mad. Worse still, veterans of the war complain of the ingratitude with which the government treated them. Many today live in poverty and, according to Olivera Castillo, "... many of the beggars and madmen who roam the Cuban streets are veterans of that war." In addition, the Cuban population was deprived of health services due to the large number of medical professionals sent to Angola. In sum, as Cuban independent journalist Tania Díaz Castro writes: "On the so-called epic of Angola, "we could ask ourselves if it was worth it for a small impoverished, island located 14,000 kilometers from Angola, to be left without those sons, mostly young ones, most of whom fought without knowing why."[20]

Angola paid a huge cost for the conflict: between 500,000 and one million dead, 3.5 million internally displaced, hundreds of thousands fleeing to neighboring countries like Zaire and Zambia, a rural infrastructure and economy virtually destroyed, the majority of the population impoverished, almost two million facing a famine, and human rights abuses becoming the norm. The horrific scenario includes war crimes, such as deliberately attacking civilians[21]/[22 and using of chemical weapons by Cuba against UNITA troops and civilians supporting them.[23] Hundreds of thousands of mines[24] were laid across the country and are still in place, causing thousands of deaths and mutilating 80,000 people.[25]

All this suffering and devastation was for what? Sadly, a quarter of a century after the end of the Cuban intervention in Angola, Angolans still suffer great political repression and economic marginalization.[26 The MPLA leaders supported by the Cuban military intervention remain in power, having implanted a state monopoly capitalism after the fall of the Soviet Union.[27] Today, they are among the most corrupt and wealthy rulers in Africa, while the majority of the 29 million Angolans live in poverty.

NOTE: Get Footnotes from "Indice del Artículo" above.

back to top
Tweet
Integrity without knowledge is weak and useless, and knowledge without integrity is dangerous and dreadful.
Samuel Johnson