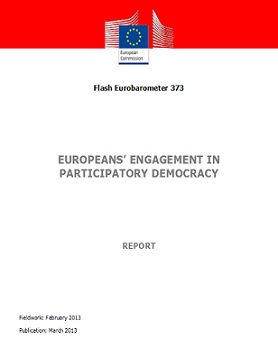 While Europe faces economic and social challenges, EU citizens continue to involve themselves in participatory democracy activities, including signing petitions and becoming active members of non-governmental organisations, mainly at local and national level. A Flash Eurobarometer measuring citizens' engagement (published in March 2013) shows that Europeans trust civil society organisations to influence policies and make a difference in the life of their communities.

The first section examines the respondents' views of NGOs and similar associations, asking whether such groups have the power to influence local, national and EU decision- making. Respondents are also asked whether NGOs share their own interests and values, and whether European citizens need these types of organisations.

In the second section, the discussion switches to the perceived effectiveness of various means of influencing political decision-making, especially voting in local, national and European elections. Respondents are also asked to consider whether joining an NGO is an effective way of exerting influence.

The third and final section covers citizens' engagement in political decision-making, examining whether respondents seek to express their views by signing petitions or by communicating through social media, for example. Finally, the discussion turns to the level of participation in NGOs and other associations, such as Trade Unions.

We have 563 guests and no members online