Menu
02/07/2022
A+ A A-
View Comments
The Belavezha Accords (Russian: Беловежские соглашения, Belarusian: Белавежскія пагадненьні) is the agreement signed by the presidents of Russia, Ukraine and Belarus which declared the Soviet Union effectively dissolved and established the Commonwealth of Independent States in its place. The agreement was signed at the state dacha near Viskuli in Belovezhskaya Pushcha on Dec. 8, 1991.  Four days later the Supreme Soviet of the Russian SFSR ratified the accords on behalf of Russia and at the same time denounced the 1922 Treaty on the Creation of the Soviet Union. 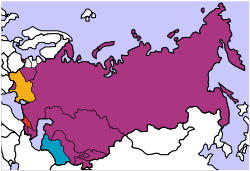 Map of the Commonwealth of Independent States (CIS)

Also on December 25, 1991, the Russian SFSR, now no longer a sub-national entity of the Soviet Union but a sovereign Nation State, adopted a law renaming itself Russian Federation.

Flag of the CIS

On 21 December 1991, the leaders of eight additional Soviet Republics – Armenia, Azerbaijan, Kazakhstan, Kyrgyzstan, Moldova, Turkmenistan, Tajikistan, and Uzbekistan – had already agreed to join the new Commonwealth of Independent States (CIS), thus bringing the number of participating countries to 11.  However, Turkmenistan (in blue in the map above) has not ratified the charter and changed its CIS standing to associate member as of 26 August 2005 in order to be consistent with its UN-recognized international neutrality status. Ukraine (in orange in the map) did not to ratify the CIS Charter and is not a member of the CIS in spite of being one of the three founding countries and of its previous ratification of the Creation Agreement in December 1991.

Note:  There is no text available in the Internet of the original Belavezha Accords document.

back to top
All progress has resulted from people who took unpopular positions.
Adlai Stevenson

We have 842 guests and no members online